Two for one Hero's!

For those who think they might have missed the Hero presentation last week...you didn't...we decided to wait till this week to make a special double presentation!

(and an interesting story of how Hollywood and it's…

The Raven has made several jumps since the destruction of the secret Cylon Lab on the dwarf planet. The Cylons are desperately…

For the last couple of weeks I have been working on putting together my very own “Flying Tiger’s” Viper Mk II model (FTV Mk II).  Thankfully, I’ve had a lot of support from Lt. Reamer with the project.  He suggested that I write a blog and post it here to share it with all of you.   I'm re-posting it now onto the main site, in addition to the Flying Tiger's… 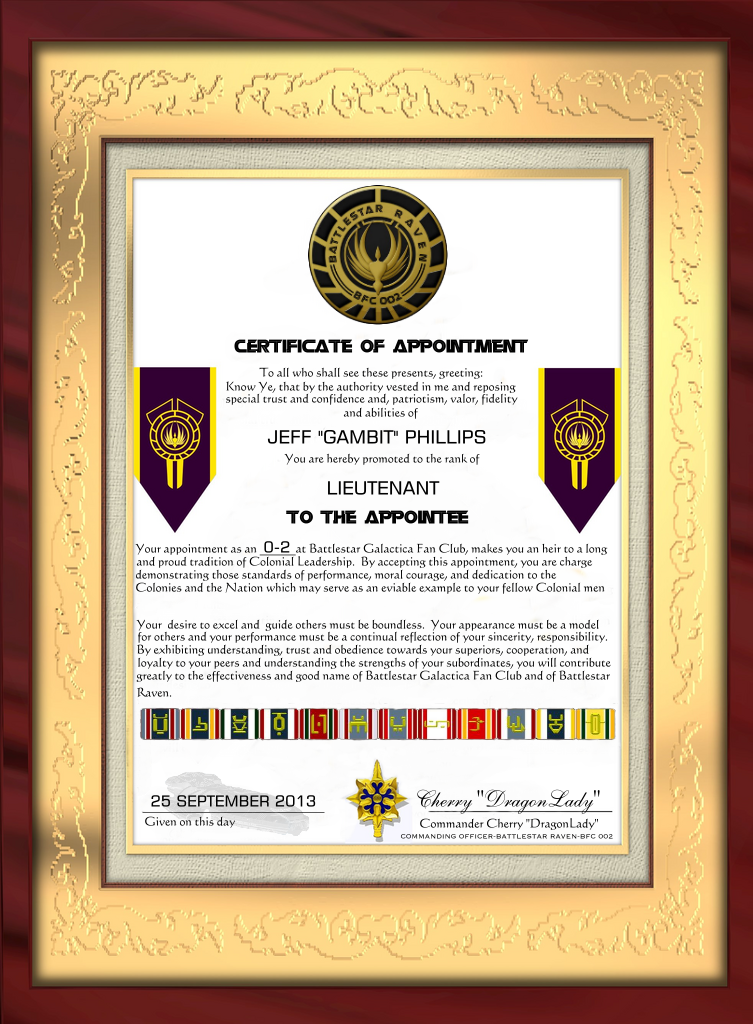 I just have a few things to announce....

I have ask and appointed Lt. Jg. Steve Tweed , as the interim-XO of Battlestar Raven-BFC 002 and will be helping me to take care of day to day business on the Raven. I expect each and everyone of you to give him the same courtesy and respect as you would give me and… 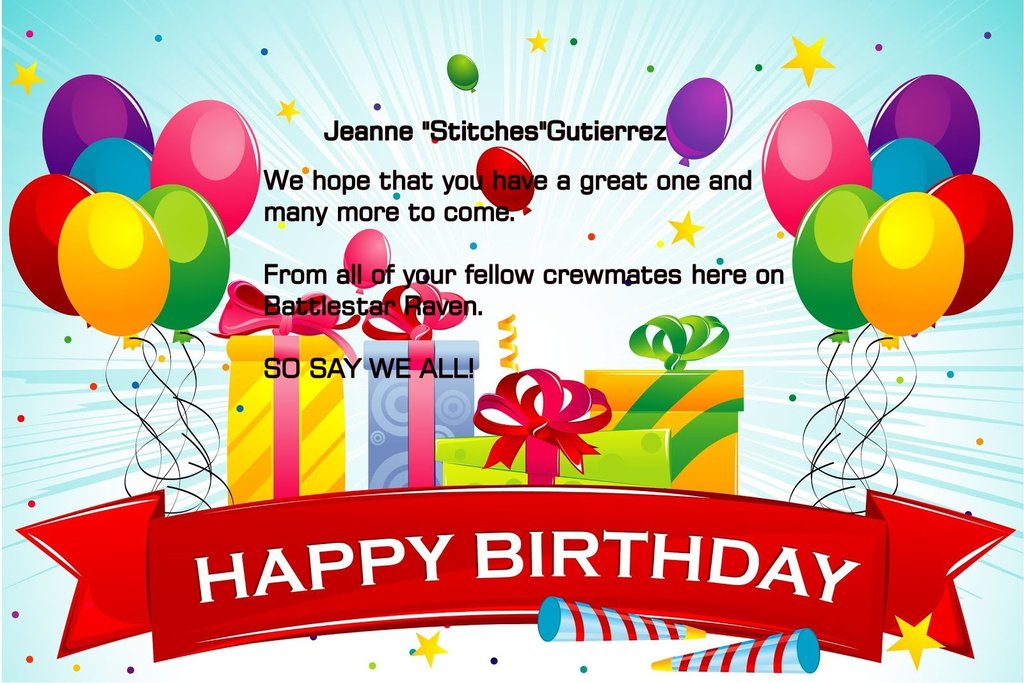 Battlestar Raven would just like to wish Raven Medic:  Jeanne "Stitches"Gutierrez A VERY HAPPY BIRTHDAY.  We hope you have a great one and many more to come.

From all of your fellow crewmates here on Battlestar Raven.

Who Designed The Original Colonial Warrior Uniform And Cylon Centurions

Hey Colonials! Check this out! This shows how and who designed the Colonial Warrior uniform, the original Cylon Centurions, etc.  http://www.galactica.tv/battlestar-galactica-1978-news/who-really-designed-the-colonial-warrior-costume.html

Today is a very special day indeed...television history was made and a new legend was born.

When the series ended, I don't think anybody could have even have dreamt the road that was to be followed, the path this…

On this Day,Thirty-Five Years Ago, A Little Sci-fi Show About Some Humans being Chased By Killer Robots Made It's Debut On ABC; This Was The Creation Of a TV Producer Named Glen Larson; He Began Developing This Idea In the 1960's; At The time, There was really No Market For Space Drama On TV,Because,After All, A Show called 'Star Trek' Only lasted Three Seasons; However, That Show Appealed To The Intellectuals, And Gained A Following That grew Bigger And Stronger as The Years Went by; Then,… 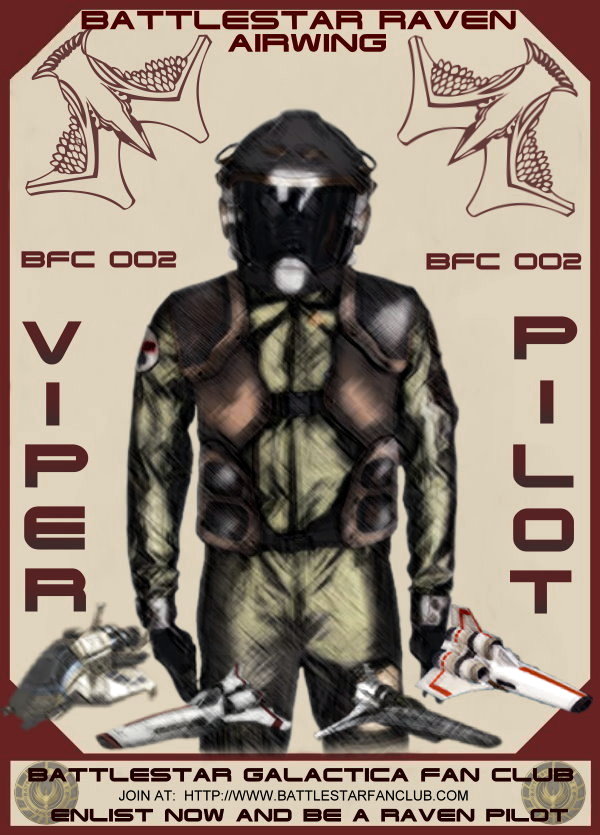 I've completed the first version of the Raven Marine black tactical short sleeve shirt. Please have a look and let me know what you think. This is a different shirt than the Razor black uniform shirt. This one is cotton and has the tactical type sleeve pockets with velcro on them. I've designed colony patches for the upper portion of the pockets and sized the Raven top gun patch to fit on the lower pocket velcro. The shirt has the traditional CDF type logo on the chest just like the Razor… 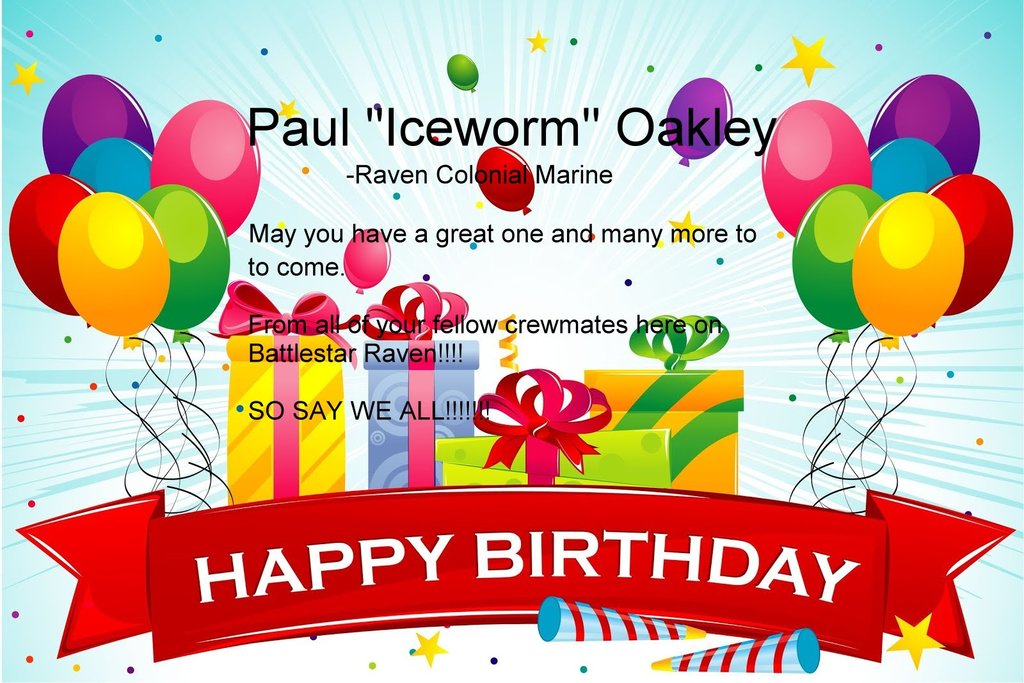 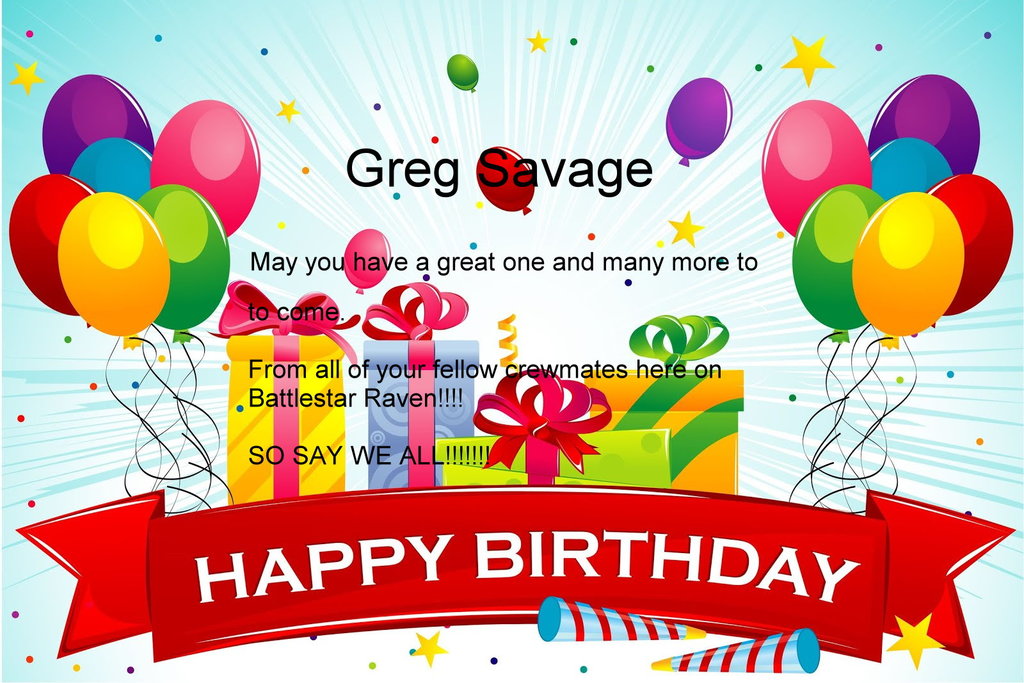 Battlestar Raven would just like to wish Raven Colonial Marine Member:  Paul "Iceworm" Oakley AND Greg Savage,  A VERY HAPPY BIRTHDAY.  May you have a great one and many more to come.

From all of your fellow crewmates here on…

We just wanted to share with all of you our NEW recruitment poster/card for BFC that we will be using for any upcoming conventions we plan on attending.  We have two versions: 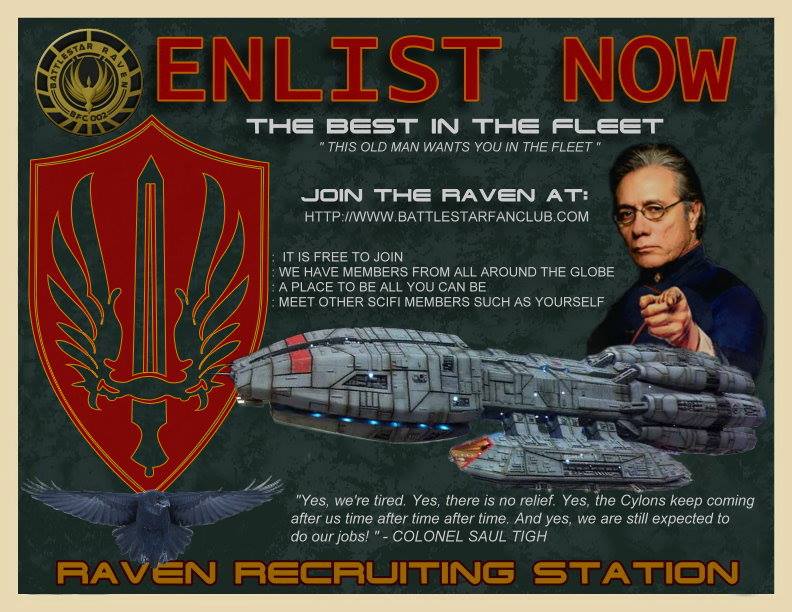 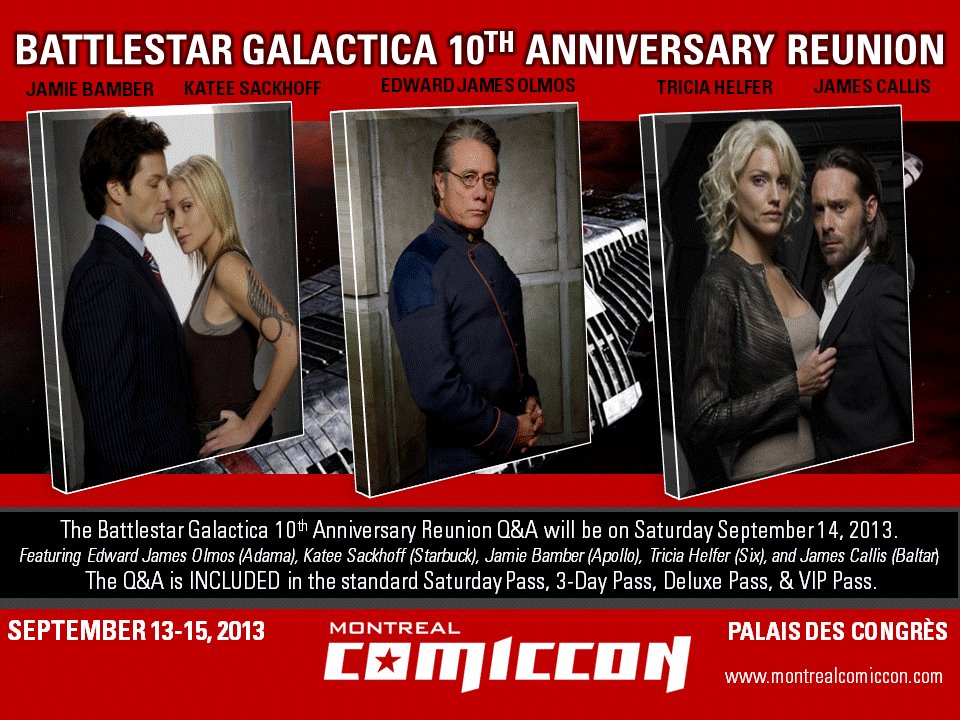 Fellow Colonials of the BFC,

Yes it is, tomorrow the celebration of the 10Th anniversary of Reimagined BSG starts in Montreal.  Edward James Olmos, Michael Hogan, James Callis and Tamoh Penickett will be there as special guests to the Comiccon. As you can see Michael Hogan and Tamoh Penikett will replace Jamie Bambers, Trica Helfer and Katee Sakhoff… 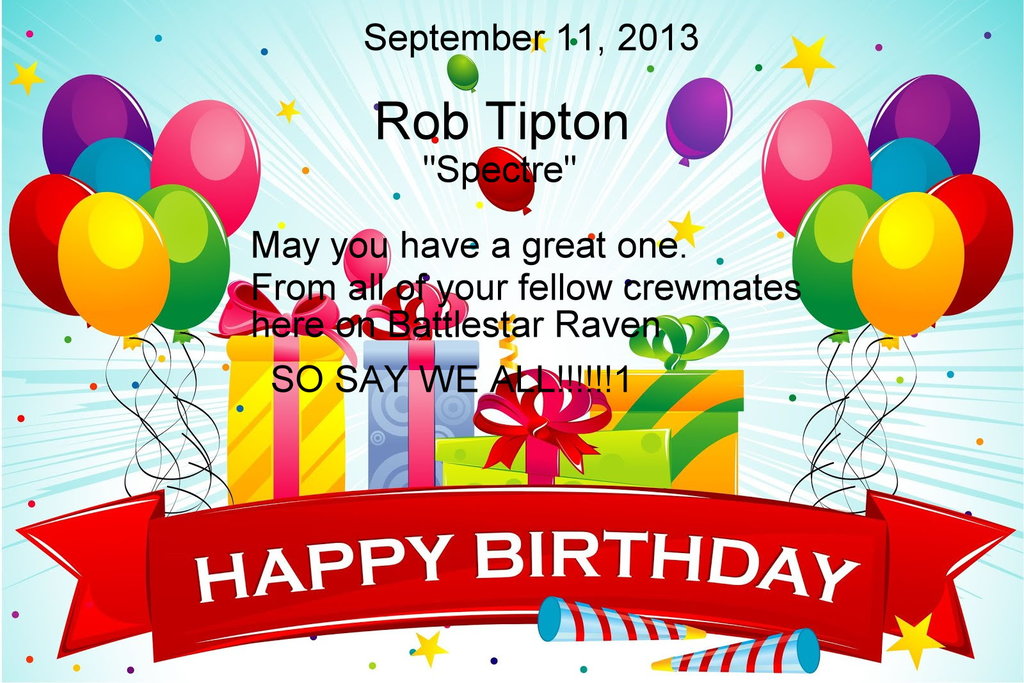 Battlestar Raven would just like to wish Raven Member:  Rob Tipton of the Blackstar Squadron, a VERY HAPPY BIRTHDAY.  May you have a great one and many more to come.

From all of us here on Battlestar Raven.

This Cylon was not much of a threat!!!! 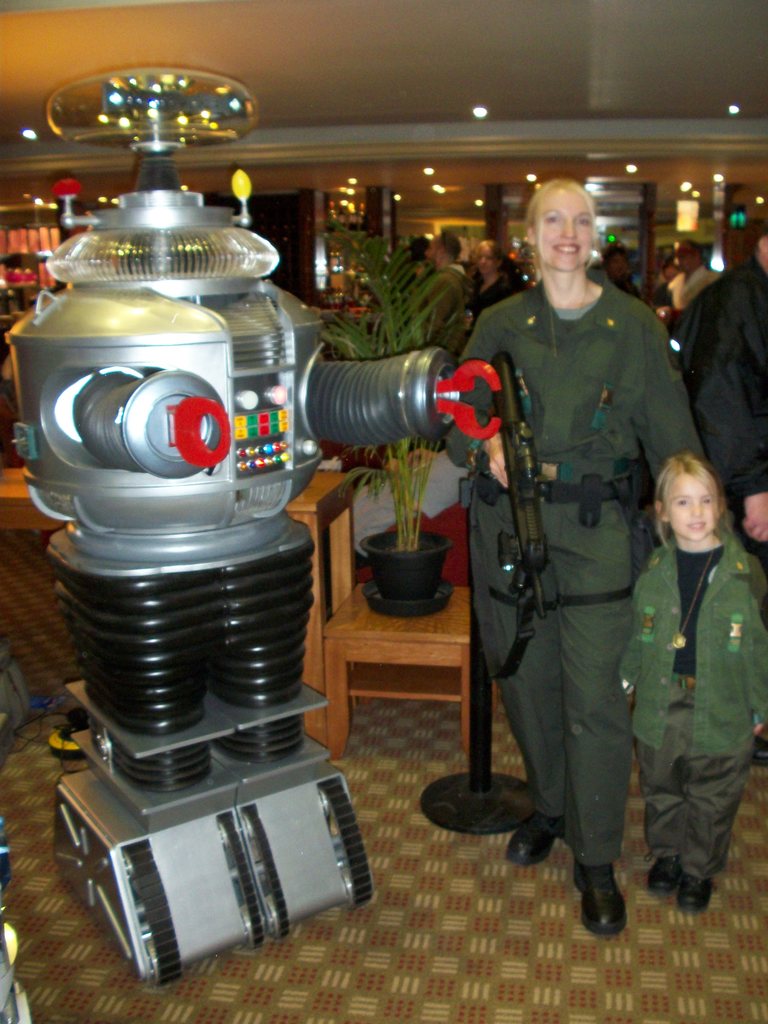