Wizard World:  Austin Texas was a blast!  But before I start, I would like to say a very BIG THANK YOU, to all those that were able to come and help out at the Raven table:

I could not have done it without their help.  Wizard World was so busy with lines of people trying to get in.  I ran into several familiar faces especially two people I did not expect to see there from the Paintball Community I belong too.  When I saw both of them at the table and Robert Ybarra was talking to the both of them, this gentleman looked over towards me and said "DragonLady???? What are you doing here?"  I looked at him and said "Oh no!!!  Oh geez!"  And we just gave each other a hug!  I said to him "Fallout, what are you doing here?  I never figured you to be a science fiction type person!"  Well apparently he is!  We got him to join BFC!  But before we parted, I told him on the side, "You did not see me here and I won't tell your secret either!"  And we both laughed!  In the paintball community, I am someone that is known and had developed a reputation for being a player that plays hard and someone you don't want to mess with but a fair player.  In this sport, the way you command yourself, is what determines how people see you as a player.  And I have worked hard maintaining my good and well respected reputation.  So it was really good to see people from my paintball community and loves science fiction like I do at Wizard World in Austin this weekend!  This was a total surprise.  We gave this individual his callsign "Fallout" because during one of his first game at our old homefield (122 acres in size) he suffered a heat stroke in front his son.  His son was shouting loud asking someone to help his father out!  Robert and I happened to be right there close by them so we came to his rescue and helped him out.  He was with our group of people defending the location we were at.   We helped him out until the field doctor arrived and got him to his clinic.  He had to be helped off the field.  We checked on him after we all came off the field for a break.  From then on, the rest was history........ :-)

I also would like to thank our Raven Member and Model builder:  Phillip Cocking, for representing the Raven and BSG as a whole, at a memorabilia exhibition in Birmingham, United Kingdom, this past weekend as well.  Just check these beautiful photos of the Raven in the TOS version that he send me with her own rag-tag fleet: 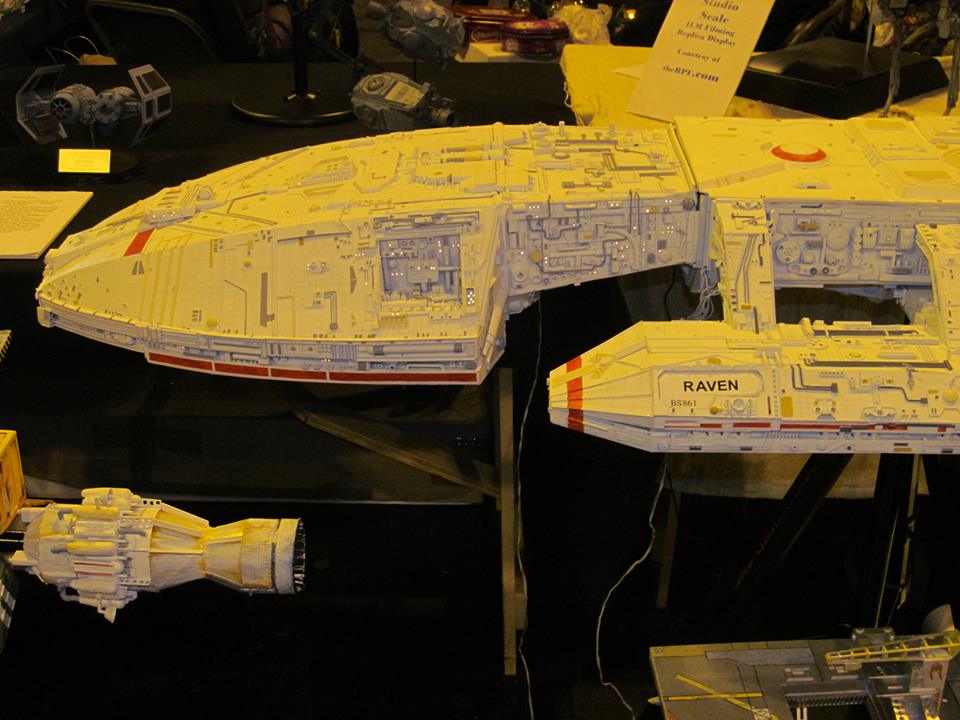 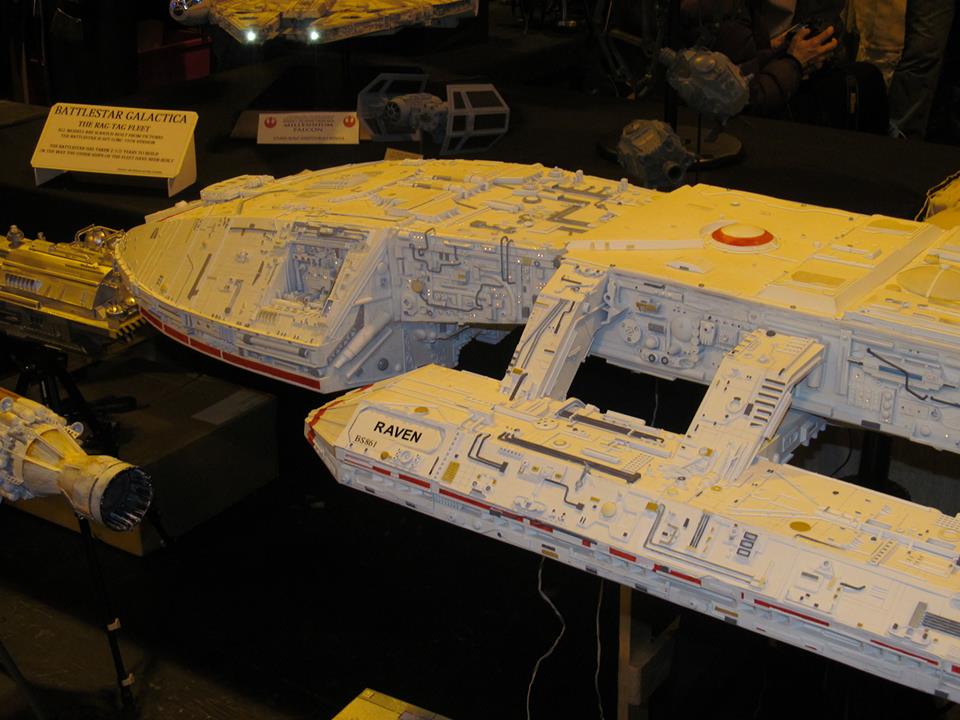 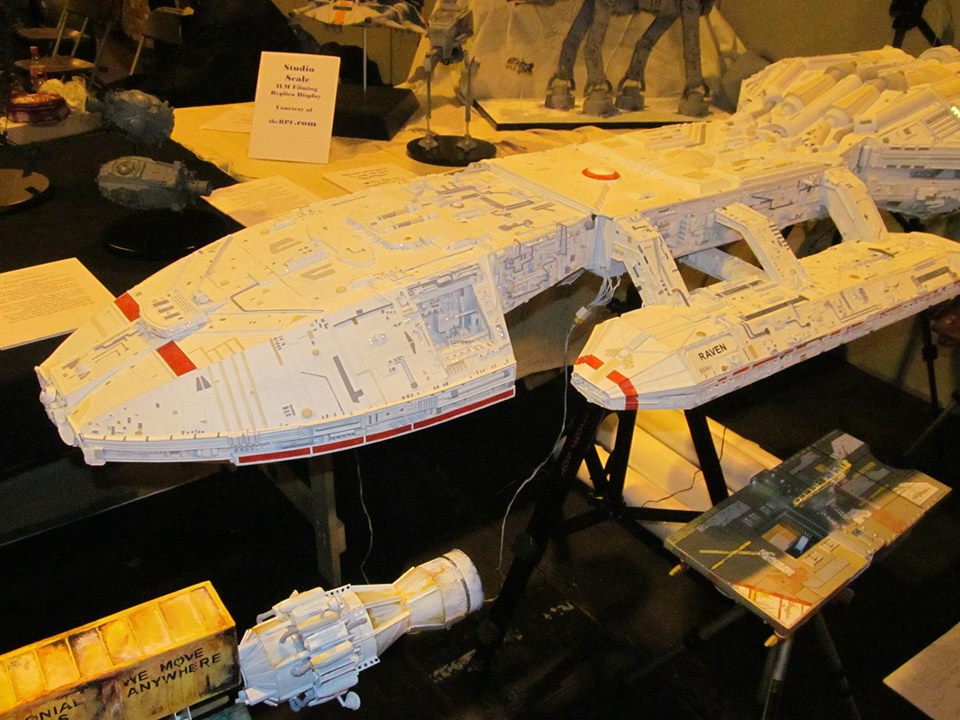 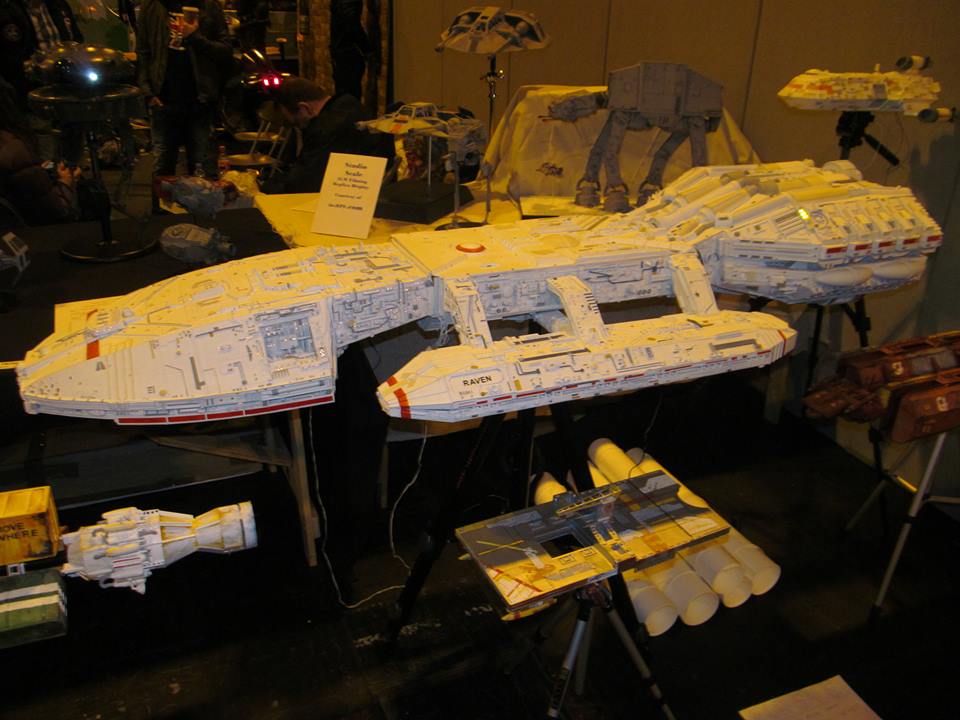 Thank you Phillip for representing us and BSG as a whole.  It goes to show you everyone, that no matter where you are at, you can represent the group you belong too and show your love for BSG as a whole in your own little way and we will be behind you and support you.

Lastly, I wanted to say a special thank you to our very own Raven Colonial Marine Member and NEW Raven Marine NCOIC:  Corporal Paul "Iceworm" Oakley!  He was there with me the whole entire duration that I was there at the convention.  He helped me carry things that I brought with me  for the Raven and set up the table.  We tag teamed talking to fans that came by the table and promote not only the Raven, but BFC and Galacticon 4.  We accomplished a lot of things that day and at the same time, enjoy doing it. I have to honestly say, he went above and beyond the mission the Raven Marine OIC gave him.  And for that, I thank him!  Now, I have to make some more flyers, sign up sheets, business cards , ready for whenever the next convention appearance the Raven will be showing up to.

GREAT JOB on the Battlestar Raven! So say we ALL!!!!