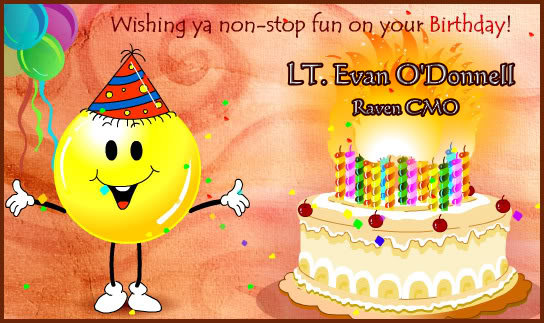 I just wanted to quickly wish my very own Chief Medical Officer on the Raven here at Battlestar Galactica Fan Club, Lt. Evan O'Donnell, a very Happy Birthday.  Your fellow Crew Members on the Raven, wishes you the best on your birthday.  May you have a great one and a very Happy New Year to you.  Be safe out…

Do less laundry use more deodorant.

Save the environment by conserving water...Bathing, shaving, and personal grooming are far over rated anyway.  Use more Cologne.

It is a well known fact that nearly all New Years resolutions are broken almost immediately after New Years is over.  For this reason, I suggest that everybody firmly resolve the exact polar opposite of what their desired outcome and personal accomplishments for the coming year are.  By doing this, you virtually assure the year will go as you wished when you break your resolutions, and...if not, you can always glibly claim credit… 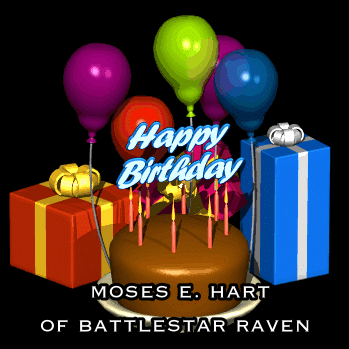 Battlestar Raven would just like to wish Crew Member Moses E. Hart, a very HAPPY BIRTHDAY here at Battlestar Galactica Fan Club.  We hope you have a great one.

Hello and Merry JesuYahren (Christmas) to all...

First things first...  Ever have one of those weeks where nothing seems to go quite right?  The last TWO weeks have been that way for me.  First, the shift changes at work... no holiday pay/bonus... Then my laptop crashes... my dog is attacked by a stray in the neighborhood... and to top it all off, the book I sent my baby sister for Christmas had pages cut up and/or ripped out of it (I…

Arm ALL Teachers And Self With Bear Spray...Safe Legal And Effective Range Is One Class Room

Bear Spray Is VERY EFFECTIVE, Not Lethal, Easily Concealed, And Legal Most Everywhere.…

Merry Christmas To All. Tribute To Fallen Victims Of Shooting. Names And Pics On The Web Site

Twas' 11 days before Christmas, around 9:38 When 20 beautiful children stormed through heaven's gate. Their smiles were contagious, their laughter filled the air. They could hardly believe all the beauty they saw there.…
Continue

A Holiday Wish To My Crew and Friends of the Raven

Crew of Battlestar Raven and Friends,

I am going to keep this short, simple and to the point.  I just wanted to quickly take my time to wish each and everyone of you and your family, Happy Holidays.  As the Year 2012 comes to an end…

T’was the night before Christmas,
And all through the Bucket,
Not a creature was stirring,
Until Tigh muttered, “F#$@ it!”

Ambrosia in hand,
Sporting his eye patch,
He ran down to the hangar
And threw open the hatch.

To what to his wondering eye should appear,
But a fully stocked bar and a crowd full of cheer!
With Starbuck as bartender, manning the…
Continue

From our friends at wildlife media:

and if you are wondering about the connection between Wildlife Media, Beartrek & Battlestar Galacica:

On to Chris Morgan's message to everyone:…

Tonight with our Battlestar Galactica Hero award, we are also going to make a special dedication.

Firstly, in light of the tragedy that befell so many people this past Friday in Newtown…

May Everybody Have A Safe And Happy Christmas And New Year! Also Here Are Some Cute E-Cards To Share With Friends And Loved Ones

I just thought I would share come cute and free e-cards...You can still use them on your friends if you like.

This one's a real gas!

This one explains what Santa REALLY would like for you to leave him.…

Well, today's the big day. Don't forget your umbrella in case the sky falls.  Have a happy Mayan end of the world...and remember...end of the world means NO CONSEQUENCES! Woohoooo!!!!

Here are some appropriate tunes for one and all to enjoy. Also, don't forget to really bug everybody about this...It's a once in a lifetime...actually once in several thousand years opportunity!

This Is A Part of My BSG/Trek TNG Crossover Story.

The Climactic Battle Between Three Cylon Basestars And The Federation's Seventh Fleet: The Drednought USS Pegasus Fires It's Anti-Proton Cannon At One Of The Basestars; The Shot Goes Right thru The Center Section, And the Force Of The blast Cleanly Cuts The Basestar In Two; The Two Halves Then Disintergrate In Two fireballs. The Shockwave Shakes the Lead Basestar;

To celebrate the spun cycle of the Mayan Calendar and the presumed cracking of the Earth like an egg on the 21st...I've been invited to participate on the Chillpack Hollywood Hour hosted by Phil Leirness & Dean Haglund (you will probably remember him from the X-Files as one of the computer hackers that Agents Fox & Mulder got info from time to time & then onto the Lone Gunman series)...and special co-host…

How is everybody this evening here at Battlestar Galactica Fan Club?  Just to let you guys know, that the Raven's first ever banner made, is arriving this week. It is 3 x 6 feet long. This will be the banner use at conventions where the Raven will be in attendance. It has a white background that contains this graphic that I…