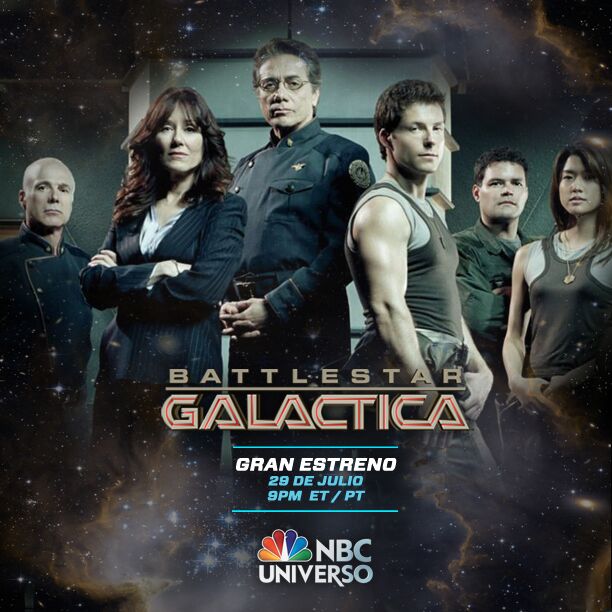 If you do not already know......From our friends over at NBC Universo....

BATTLESTAR GALACTICA, THE CULT HIT SERIES, TO AIR ON NBC UNIVERSO IN SPANISH FOR THE FIRST TIME ON U.S. TELEVISION

MIAMI – July 28, 2015 – NBC UNIVERSO, the modern sports and entertainment cable channel for Latinos, today announced the launch of Battlestar Galactica, the cult classic which remains one of the highest-rated series ever on Syfy. From Universal Cable Productions, Battlestar Galactica is now slated to appeal to a whole new audience when it airs for the first time in Spanish on U.S. television beginning Wed., July 29, at 9 p.m. ET/PT.

Battlestar Galactica is the latest hit series NBC UNIVERSO has introduced in primetime as the channel recently launched Law & Order: LA and Suits in Spanish on Tuesday nights. Already a legendary franchise in English and with a global fan base, Battlestar Galactica, transports viewers into a world where human civilization has extended to a group of planets known as the Twelve Colonies and has engaged in a lengthy war against a cybernetic race known as the Cylons, whose goal is the extermination of the human race. After the Cylons carry out a massive attack on the Twelve Colonies and on the Colonial Fleet of “starships” that protect them, scattered survivors flee into outer space aboard a ragtag array of available spaceships. Only the “Battlestar Galactica,” a gigantic battleship and spacecraft carrier, survives the Cylon attack.

Under the leadership of Commander Adama (played by Academy Award nominee Edward James Olmos), the “Galactica” and a team of "Viper Fighters" lead a fleet of survivors in search of the fabled thirteenth colony known as Earth.

“Battlestar Galactica defined a special era for me as an actor and I am very proud to have been part of such an iconic franchise -- It’s thrilling to know that this work carries on and will now be enjoyed by legions of new Spanish-speaking fans,” said Edward James Olmos. “The show also delved into issues of mixed races and gender equality which I think new fans will find to be quite relevant today.”NBC UNIVERSO viewers can watch the series every week on Wednesdays from 9-10 p.m. ET/PT. The series also stars Grace Park as Battlestar Galactica pilot Number Eight, Mary McDonnell as President Laura Roslin and Jaime Bamber as Captain Lee "Apollo" Adama.

"Sci-fi is an extremely popular genre among Hispanics and NBC UNIVERSO is thrilled to build on its sci-fi offerings which currently include Warehouse 13 and Eureka,” said Bilai Joa Silar, Senior Vice President, Programming & Production, NBC UNIVERSO. “We are looking forward to introducing Battlestar Galactica to Spanish-speaking audiences in the U.S. and creating a new ‘Colony’ of “Galacticans.”

Subscribers of NBC UNIVERSO on participating cable, satellite, and telco services also will be able to view episodes of Battlestar Galactica in Spanish on Video on Demand, as well as onnbcuniverso.com and the NBC UNIVERSO NOW app by entering the subscriber’s log-in information. Battlestar Galactica is from Universal Cable Productions and originally aired on Syfy from 2004-2009. It was one of the channel’s highest rated series and out-performed UPN’s Star Trek series.

NBC UNIVERSO (www.nbcuniverso.com) is a modern sports and entertainment cable channel for Latinos, bringing the world’s top sports franchises and edgy programming to more than 40 million households in the U.S. As one of the most widely available modern cable channels for U.S. Latinos, NBC UNIVERSO delivers a thrilling mix of exclusive sports action – including FIFA World Cup™, Liga MX, Premier League, NASCAR Mexico Series, NFL and The 2016 Rio Olympics – along with signature series, blockbuster movies, music, must-see live events and strategic acquisitions, on TV, online and mobile devices. NBC UNIVERSO is part of Hispanic Enterprises and Content, a division of NBCUniversal (www.nbcuniversal.com), one of the world's leading media and entertainment companies. NBCUniversal is a subsidiary of Comcast Corporation (www.comcastcorporation.com). To find the NBC UNIVERSO channel number in your area, please visit www.nbcuniverso.com/encuentralo.

Battlestar Galactica is an American science fiction franchise created by Glen A. Larson. The franchise began with the original TV series in 1978, followed by a short sequel in 1980, a two-part three-hour mini-series in 2003, and a weekly TV series in 2010. In 2010, there was a spin-off prequel entitled Caprica.