Well, what can I say!  The Raven Battle Group was very busy this past weekend.  The group was represented at two different conventions:

First off, I would like to thank the following people who helped at the Raven table:

Paul Oakley- Gunny was with me throughout the whole entire four days.

Steve Tweed- My XO who came all the way from Wisconsin and helped out for two days.  It was a pleasure to finally meet him in person.

Tim Riley- The Raven Cylon Command Centurion Member.  I was glad to see him doing what he love best once considering what he recently went through on a personal level. I know she is smiling down on you seeing you doing what you love doing with her.  As always, Tim attracts a lot of people as he walks around.

Tony and Cherie Leach-  What a surprise indeed was this for Cherie from her husband Tony.  He surprise her with coming to Comicpalooza to meet Jeremy Renner.  Thank you for coming all the way from Oklahoma and hanged out at the Raven table allowing me to enjoy a little bit of what the con has to offer.  I was able to meet and get Stan Lee's autograph and Jeremy Renner. So mission accomplished on my part on that aspect.  And Cherie and Tony, you both are a riot LOL!!!!  I was watching my oldest son during the first group dinner laugh at Tony as Tony tells stories about Cherie! :-)

Many thanks to all those who dropped in and said hello- new members George Mellis and his friends, Rob Tipton, Gayle Jackson and her family and others......

The Raven was also represented at the Tulsa Comic Con and was headed by Raven Communications Officer Shane "Ogre" Coble.  Shane just went through a recent shoulder surgery so I was a little reluctant him doing a lot of work manning the Raven table at the Tulsa Comic Con when I saw him make a post with in regards about the Tulsa Comic Con.  Shane and I spoke on the side that as much as I appreciate him wanting to represent the Raven at the Tulsa Comic Con, I rather not have him do it because he should be recovering from his shoulder surgery.  But he kept re-assuring me he can handle it.  So I finally said, okey....I will do what I can to support you. I made him promise that he will take it easy while doing it.  I then send him some promotional items for the Raven, BFC and Galacticon 4.  And it looks like it was a success as well. I would like to make a note per Shane's report to me, that special credit goes to Jill Horton for helping out at the Raven Tulsa table and she is not even a member.  To Jill, thank you very much for helping at the table! I agreatly appreciate that.   And to Chris Rowe, the convention director/promoter for the Tulsa Comic Con, thank you for inviting our group and having us at your con once again.

It was indeed a twin convention appearance for the Raven Battle Group this past weekend.  But the highlight between the two cons was everyone having fun, meeting new members in person, meeting my XO for the first time in person and my one and only good friend Miguel Rivera, coming down to surprise me the way he did.   I have not seen him in over two years since we saw each other last at Galacticon 3.  We were texting each other before I arrived at the convention site.  He was telling me and the kids to have fun.  But little did I know what is about to transpire.  I finally arrived at the Raven table with the rest of the display that is suppose to be put on the table.  Then as I was talking to everyone that was there, I heard someone say to me from my left side " Hi!"  It took me a little bit to realize that it was Miguel in the flesh.  When it finally dawn on me, I just dropped whatever I was doing and went towards him and gave him a hug.  Out of all the things I can find to hit him with for being sneaky, I ended up grabbing a ball cap hat LOL.  Him and I have been through a lot together in the science fiction community. We went through our own set of ups and downs together and our friendship was tested and even put to the limit.  But in the end along with time, we reforge a much stronger friendship which is solely based on our experience with science fiction political BS and drama.  We promise each other to never let scifi drama or scifi political BS, to ever put a wedge in our friendship ever again.  We both believe what we do on the side should be fun, not to be taken too seriously and should not let the ficticious rank get to ones head. It is only for the enhancement of ones experience in that scifi community.  We both know and have seen that there are a lot of people out there that are just like that.  And they take the fun out of things.  All of us have lives outside the virtual world of battlestars, cylon basestars, vipers and raptors.  And that real life event is more important than anything else.  Real life should not be mix with what is not real.  And that is what Miguel and I have learned through our unpleasant experience in the past.  We both swear that we will NEVER ever allow a repeat of that kind of experience ever.  A couple of beliefs him and I both share are as follows:

1.  We believe in quality vs. quantity in membership wise

2.  It is not all about the ficticious rank.

3.  It is about the members

5.  It is about helping other members in need

The one highlight I will never forget that made my jaw dropped out of surprise was, being promoted to Rear Admiral by the BFC Fleet Admiral. ( Thank you for the gorgeous RADM pins Miguel )

I was not expecting that at all.  I have always been the kind of person just satisfied being the behind the seen kind of person.  If you notice, I do not even use the rank that comes with being the CO of the Raven on my profile page.  I am quite content using DragonLady or Raven Actual.  I can just be as effective and do kickass work by just remaining simple.  I do not need long titles or signature lines for people to know who I am.  I am known through the scifi community as DragonLady.  And I am satisfied with that.  But like Sgt. Hillman said to me on the side, I better get used to the crew calling me Admiral DragonLady because that is who I am now. :-) :-)  All I can say is, I will try my best to get used to it and be worthy of that rank. :-)

And to everyone who had a hand in the surprise celebration that took place for me over the weekend, THANK YOU SO MUCH from the bottom of my heart especially the POINT man, Iceworm! AHEMMM!!!!! And yeah, yeah!  You told me you were only following orders. :-)  I have to start keeping an eye on you LOL.  But thank you so much for everything. 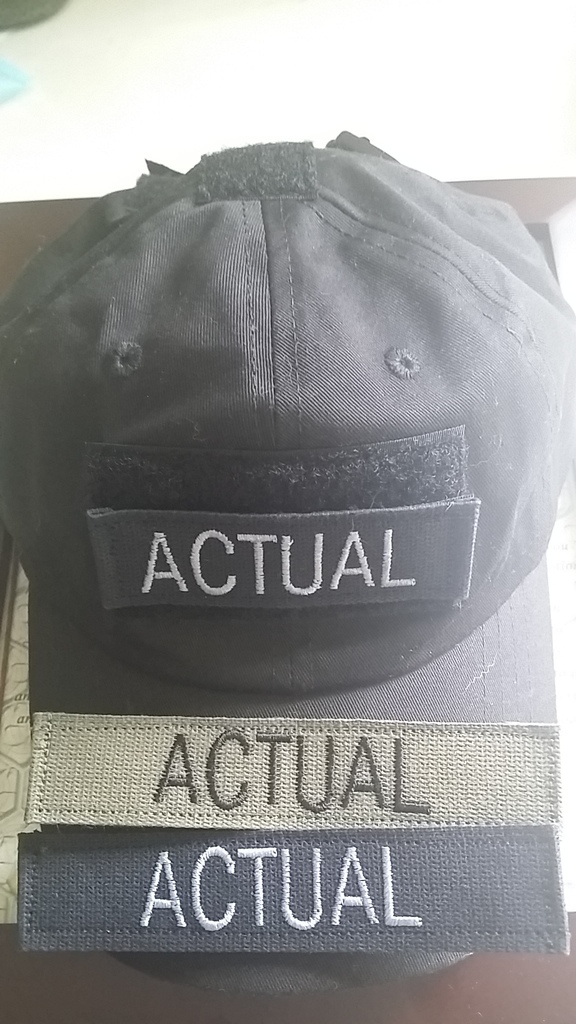 ( Iceworm, THANK YOU SO MUCH for this hat. The simpliest gift sometimes makes the best gift of them all. I am really tickled by this and cannot stop smiling at it :-) )

Miguel, thank you my friend for such a wonderful surprise.  I know you were only here for one day but to me, that is worth more because we made the best of the time we had together.  It was truely indeed a memorable weekend for me.  It felt like good old times when were together on the Aries going to conventions and manning the table together.  The Aries will always hold a special place in my heart for she was my first baby and creation when I was her CEO.  And that will never change even though I have the Raven now. The Aries and Raven will forever be linked together because of you and me.  The Aries will be the big older sister ship to the Raven. As far as the Raven group, everyone here sure knows how to have fun no matter where we are. This Memorial Day weeked, it was Houston and Tulsa  NOW OFF TO GALACTICON 4 for the Raven Battle Group!!!!

A very well said after action report.  I concur with what has been said here so far by everyone about you.

Outstanding AAR and well said on a lot of key points. You have always been that kind of person. I have to agree with what Lt. Morelli said about you.

For the short time I have had the pleasure and honor to not only be a part of the Raven but to get to know you just a little bit. It is very clear that you not only are held in great regard in real life but here in the sci-fi life as well. It is more than clear that your role models growing up were very strong and influential in your development. This goes to show the kind of person that you are and the people who you surround yourself with. That is why you Admiral Ma'am you are so loved. So to this I cab say thank you for being you.