All Heavy Raiders prepare to deploy Centurions for Planetary Mop Up

Fleet Group for Heavy Assault on Picon.......Day of Judgement God is

calling.......The Final Annihilation of the Life Form known as Man.....

No More War Pigs have the Power, Hand of God has struck the Hour....

After the Armistice,ending the First Cylon War,was Signed, The Ink was barely dry when the Colonial Fleet Admiralty saw the Data on the Two Marathon-Class Warstars,And they liked some Particular Trends;However,They soon realized that with the Losses the Colonies,and the Colonial Fleet took, they would need to go bigger and better...and fast.

They took A Hard Look at the Two Saturn-Class Warstars(Variant of the Mercury-Class Battlestars),and were not too impressed; They need to go Much Bigger;They needed A Ship large enough to carry and lay down Massive Quantities of Firepower in any Battle;A Ship befitting the Designation 'Warstar'. (AUTHOR'S NOTE: THIS IS NOT TO BE CONFUSED WITH THE BATTLESTAR ARIES,BSR-26)

The Admiralty finally stumbled upon A Proposed Variant of the Limited-Production Titan-Class Battlestar (Whose Manufacturing Infrastructure was still in place) and very much liked what they saw; Because of it's Distinctive Head-On Profile, The Admiralty took to calling it 'Warstar X ': Eventually, They would christen the Class after The God of War,Whom with Hades,Lord of the Underworld,attempted to overthrow the Other Gods;Legend reveals that this lead to the Conflagration that forced the 13 Tribes to flee Kobol,never to return.

The Fleet Admiralty requested Approval for 12 of these Huge Ships(One for Each Colony,with an Option for Three more) to be built.

The Quorum of the Twelve would bring up the Eventual Question: Why does the Fleet need that many Massive( And Massively Expensive)Ships? The Quorum was showed Classified Intelligence,gathered by the Raven Battle Group ,along with other Clandestine Fleet Reconnaissance/Intelligence Gathering Assets,That clearly showed that the Cylons were not only evolving,improving,and upgrading Their Military Striking Power,They were building more of It at an Alarming Pace;If the Colonies were attacked again,Not even Current Fleet Doctrine would survive;The Colonies had to build more,bigger,and fast.

The Quorum, along with the President,Unanimously approved Production of the Ares,And several other Classes, Days Later, Because they knew the Clock was ticking.... It was Intended to build one per year;It's More Modern Design was intended to benefit from New and Upcoming Technology,Including the New Fleet CNP Program,being developed by Dr. Gaius Baltar.

Two were completed,One was Under Construction  when the Cylons struck.....Time had run out.

First Ship Completed; Assigned to Warstar Group Three (WSG-03), First Fleet;Was purported to be the Fleet Flagship in A Proposed Invasion of the Cylon Homeworld;Those Plans were dropped when Certain Details were Accidentally Leaked to the Media.

The Ares was in Orbit Above Fleet Headquarters on Picon when the Cylon Invasion Began; Almost immediately, the Ares was shut down...10 seconds later,the Reserve Energizers(not connected to the Main Computer)Kicked in;Unfortunately,The Ares could not manuver or escape,It could only Return Fire and maintain Life Support.

It took the Cylons at least 10 of their New Base Stars to surround the Ares; They had to resort to Ramming the Ship with A First War Base Star converted to A 100MT Nuke;The Massive Explosion scattered Debris all through the Cyrannus System;Most of it formed an Artificial Ring around Picon,To this day that Ring is called the 'Folly of Ares'. Partnered with First War Veteran Warstar Marathon; The 5th Fleet was the Only Remaining Major Fleet Formation that did not have the New Fleet CNP Program Installed; It was Scheduled to be Installed upon the Fleet's Return to it's Home Port of Salamis Station, Tauron;Fleet was finishing it's Patrol of the Outer Periphery of the Cyrannus System  and was prepping coordinates for the Jump Home when they received the Following Message:

TO ALL COLONIAL FLEET UNITS:

CYLON ATTACK UNDERWAY; THIS IS NO DRILL

Change of Plans,No Doubt;Shortly afterword,They picked up A Series of Strange Messages about Colonial Ships,Even Whole Fleets being shut down like 'Somebody just flipped A Switch'; Then, they Remembered that they had been Equipped with the New CNP Program...the Very same one They were supposed to get when they got Home.

Putting 2 and 2 together was almost easy.

So, What were they to do? Who was In Command of the Fleet? They received A Message that Bill Adama was taking Command aboard the Battlestar Galactica, And to Rendezvous at Ragnar Anchorage; But Wait,If the Cylons are using the CNP to shut down our fleet,can they use it to Tap In to Our Secure(even Scrambled)Communications?

Until they had A Clear Picture of the Situation,the Safe Bet was to maintain Subspace Silence.

The 5th Fleet is still out there..Somewhere...

Was only 40% Complete when it,Along with the Ithaca Shipyards at Leonis was destroyed.

Keel was scheduled to be laid the Following Year.

OTHER SHIPS ORDERED( No Registries Assigned) 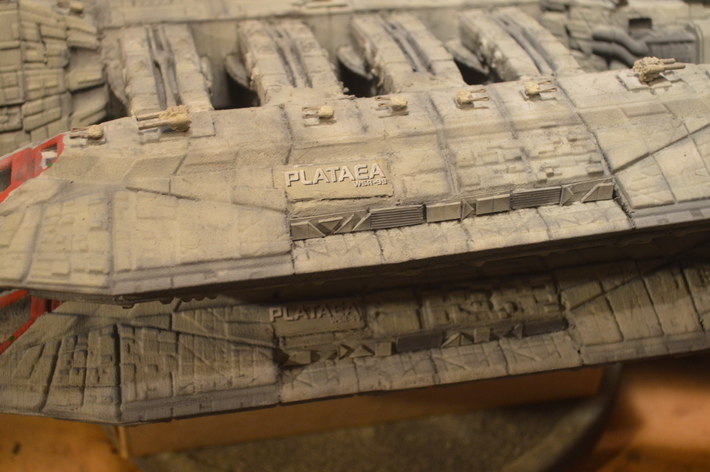 This,Quite Frankly,is the Biggest Model Kit I have built so far;Can they get any bigger?

This Kit is Courtesy of Jack Burgin jr.'s Facebook Group Colonial Fleet Shipyards; This was originally to have been cast in Polyurethane Resin, with the Starting Price Tag of $300 USD; I ordered this Kit back in October 2016 with the Thought: Will anybody else actually produce this ship in Moebius Scale? Kind of Academic, since Moebius lost it's Licence to Produce BSG kits..what A shame.

Then...3D Printing Tech came just in time! It's still Big, however, the Parts are lighter,and For those who want to add lighting to the ship,It should be easy; The Best Part: It reduced the Price Tag by about $65(Confirm with Jack about the Price,for it hasn't been exactly set in stone yet).

The Head and the Engineering Sections are Printed into Four Parts Each;The Center Section is one Hollow Piece;The  Four Flight Pods are in Two Halves each,and the Pod Support Arms are 16 Solid Pieces. 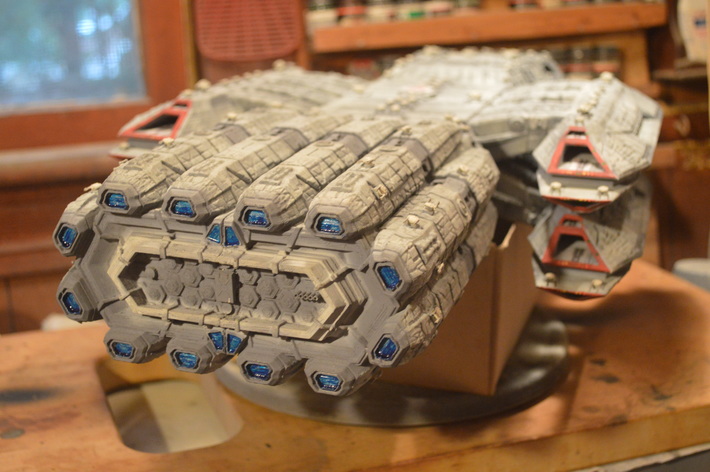 The Kit does come with Gun Turrets,But not Enough of Them.

This is where DownenScaleReplicas.com comes in! Troy Downen produces some very fine Gun Turrets in Many Styles,whether Manned or Automatic,Two Barrels or Four,even Heavy Turrets and Turbo Lasers! He's got A lot of good things for Us BSG Modelers, Including Custom Decals,with more coming in the Future!

The Initial Paint Color was Rattle Can Uniform Grey from TheArmyPainter.com; Then,after Running out of Model Master Canada Voodoo Grey,Humbrol Matt Grey 147 saved the day! Weathering with Acrylics and Dullcote finished it off.

The Display stand was basically A Shelving Board from Lowe's Hardware,then Cut and Beveled by My Friend Greg at Hobby Town USA;The Grecian Columns are the same ones you find on Fancy Wedding Cakes,and Available from Walmart or Amazon : They know well the Consequences should the Warstar Plataea,Along with the Rest of the 5th Fleet,should ever One Day show up on the Doorstep of Their Home World:

" If We do,They'll return One Day and seek Revenge.." 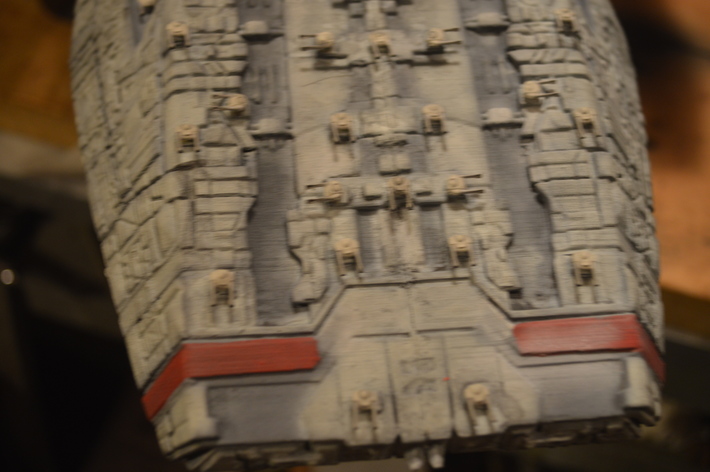 The Cylons are sending whatever They can spare to hunt down and destroy the 5th Fleet.

This is A Task They would have Preferred to give to Cylon Model Zero and Her Fleet;But now,She is locked into Her Pursuit of the Raven Battle Group......Then,There is the Pursuit of the Battlestar Galactica and the Fleet of Civilian Ships under Her Protection,In search of A Long-Distant Planet known as Earth.

The Cylons may have A Plan and the Technology,but they do not have Enough Resources to go around......

The Plan is Vulnerable....

If there was anything the Colonies had close enough to A Death Star(Or, at least A Super Star Destroyer), Then this would be it!

BONUS: Comparisons with other Ships in the Fleet: 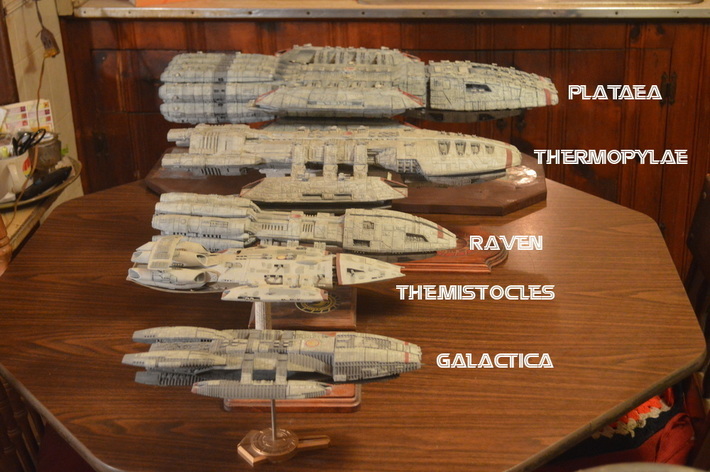 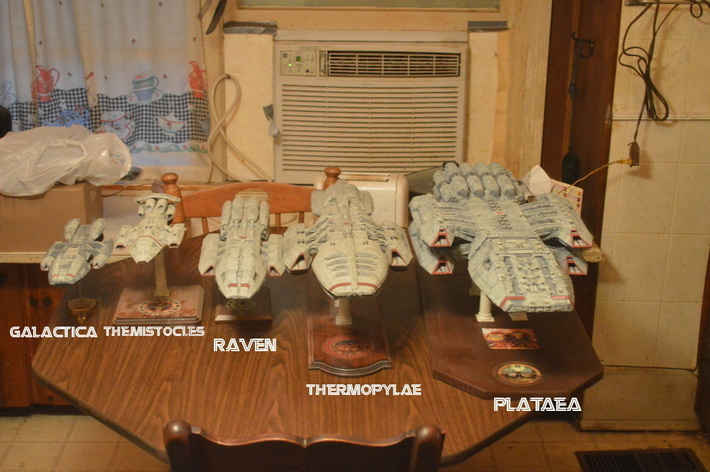 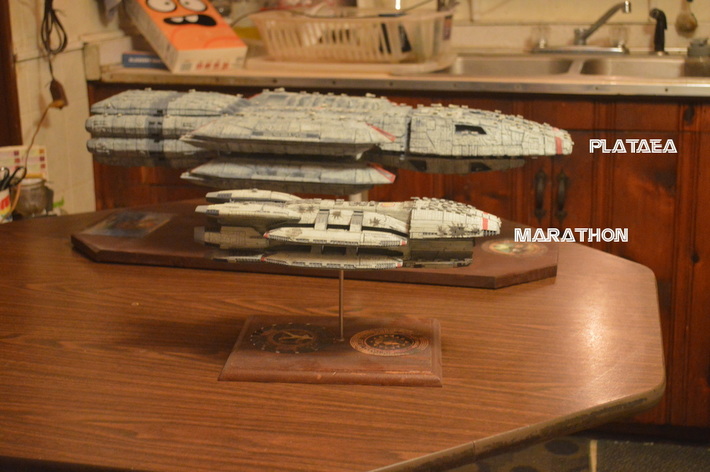