This time out, we are talking with Jack Stauffer...who all fans of BSG know played the role of Bojay in the original series.

Jack has a long history in television (and film) along with a thriving stage career...beginning on television with his role on All My Children as Dr. Chuck Tyler, he has also appeared in The Partridge Family, Harry O, The Bionic Woman, The Fall Guy, &...well the list goes on.

Jack always brings his good sense of humor to any convention he graces & is a true fan favorite!

Shawn: What was your first convention experience? 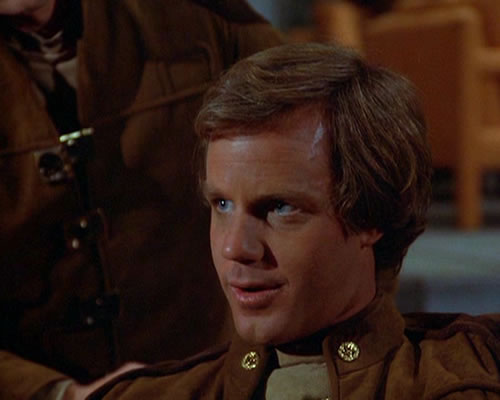 Jack: I had no idea what a sci fi convention was. I was on a commercial audition one day late 97 or early 98 and ran into Annie (Lockhart). I was pissing and moaning about how little work there was and she asked why I didn't try to go to a few cons. I told her I had no idea what she was talking about. She asked if by any chance I had any pictures of me from the show. She came over to my house for coffee and i showed her the three original pix that I got from the publicity dept. at Universal when we all heard the show was canceled. Those are the black suit pictures and they were on the wall in my den. Annie went nuts because she did not know there were any pix of us in the black suits. She and I agreed to a swap. I gave her the picture of her and me and she introduced me to the con world.1st con I think was that Hollywood Show they do all the time in L:A. From there it was the big Creation Star Trek show in Pasadena. That was when we had more access to Creation. It was at the Pasadena Creation in 1998 that Richard and I reconnected and I agreed to help with "The 2nd. Coming". I then really started to go to cons with Richard when we were promoting the trailer. Sophie (LaPorte) packaged the two of us together.

Shawn: So how did it go, those first cons?

Jack: I think I discovered very early that I did not have nearly enough drawing power to pursue doing cons full time. Even in the beginning, the fact that I did the last four episodes and was not one of the BSG contract players meant that when it came time for fans to buy one of my pictures it was always after they had everyone else. 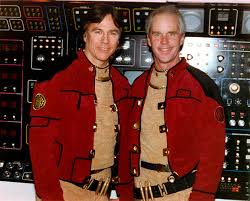 Shawn: What would you say was your best con?

Jack: Best con believe it or not was one of the Joe Motes cons in Orlando. Long before Megacon. Joe's cons attracted the fans who wanted autographs. They were Saturday Sunday events which he held two or three times a year. It wasn't that there were thousands of people attending. However, everyone was there to see the actors. Katy was with me and I remember we didn't have a line or anything. It was just a steady stream of one or two people. I didn't even know how much we made. On Saturday night she dumped the cash on the hotel bed and I was overwhelmed at how well we did. We did about half that amount on Sunday. The only other one that came close was a Toronto Trek where Richard and I sat together and kept the fans laughing all weekend. The US dollar was strong then and when I changed the currency from Canadian to US dollars I was surprised at how well we did. Interestingly, big cons like Dragoncon and Comic Con and Megacon where everyone said I would make a fortune were always disappointing because although there were thousands of people, there were too many actors from newer shows with big names and that's where people spent money.

Jack on Lois and Clark

Shawn: How about the worst con?

Jack: in terms of money would be one in Lubbock Texas at Texas Tech University. There was literally nobody there. I remember Jeremy Bulloch and I sat and swapped stories all weekend. I had no guarantee or anything and made $100. Other horrible one was the big Wizard con in Anaheim. All they gave us was a table but they promised thousands of fans. I drove down and got a hotel room at my expense. There were a lot of fans (over 5000) and also every actor who had ever been on a sci fi, horror, anime, etc. show. The big draw was all the actors from "Lost". I did get to sit next to Mickey Rooney all weekend.

Jack: Craziest fan was the guy who kept giving me the dialogue and expecting me to remember what I said as Bojay.

Jack: I would never say I was treated badly by any con promoter. I have been left at the airport a couple of times. I have been stiffed by a con promoter twice when the con did not do well and I was given a check for my guarantee which bounced. I have always treated the fans with respect so I have not had a fan be overly rude to me. What I have always hated was schlepping my bod across the country, sitting behind a table for three days, and not making a dime. I always felt like I was begging like a merchant in a bazaar in some third world country.

Maybe it's better to say unfortunate experiences rather than bad experiences. What all of us from the original BSG have to realize is we are in way less demand these days. Firstly, the show has been gone for 35 years and any fan who might want one of my pictures probably has it. There are no new episodes with new pictures that somebody might want to add to a collection. There are also way too many newer shows with younger more prominent casts which appeal to a younger audience many of whom don't even know the original BSG. You also have more and more big names who are asking exorbitant fees for pictures ensuring that the fans are out of money before they get around to someone like me. I had a conversation with Dirk recently and he told me he was pretty much through with doing cons because of the reasons I have stated. Now I have sat next to Dirk for a weekend and watched him get wrist cramps from signing so many BSG and A Team pictures. If he feels his earning potential is worse, imagine how it affects me. 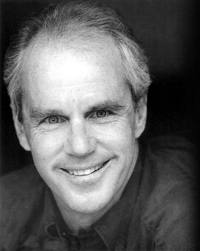 Shawn: What would you do differently if you were running a convention?

Jack: That's a broad topic.. In a nut shell - give the fans more than they usually get at an average con, make it convenient and reasonably priced for them to attend, and be thoroughly organized so you can make a profit. PROMOTE - PROMOTE - - PROMOTE!!!

What I personally would like to see in a con are options that would allow a promoter to invite a lower tier guest such as myself. As you know very well, I have always had a great reputation as being an exceptionally fan friendly guest. It has always been my policy, if I have been invited to a con, to be available to the con for the duration and to do everything I could to help the con be successful. I have comported myself and treated fans exactly the same way whether they bought pictures or just wanted to gab. I have kept my autograph prices below what many people are charging and I have never made a fan pay me if he or she just wanted a snapshot of me or of me and the fan.

What I can offer and what I would like to see a con offer is something other than an old actor sitting behind a table. That is why I came up with the Cabaret and lately why I have added the theatre seminar. This is entertainment and programming other than the old Q&A's with the same old questions. Why do you think Richard came up with his acting class?

Back in the early 2000's I found the cabaret got me into several cons that otherwise would never have invited me. Mostly they were smaller cons with fewer actors which allowed time for different programming. I had no idea whether or not sci-fi geeks would even relate or want to hear songs from Broadway shows wrapped around a few funny stories. I was amazed at how well it went over. I found it was easier to ask for a fee for me to provide evening entertainment rather than just ask for an overall guarantee. That way if not a lot of people wanted to buy autographed pictures I still came home with a few dollars in my pocket.

Guys, wouldn't you like to offer entertainment other than seeing "Rocky Horror Picture Show" for the millionth time?? That is what I bring. I can offer something to a con other than just an old actor hawking 35 year old pictures. I was so disappointed at SCI-CON and Geekonomicon when we had to cancel the cabaret because there weren't any people. I had spent quite a bit of time rehearsing it and polishing it and I was looking forward to doing it. I am an actor, and entertainer, and a teacher. I am a professional with 45 years of experience. I am good at what I do and I want to pay it forward. Make use of me. The only thing I ask for in return is a ridiculously small guarantee. Considering what other actors charge for just allowing you the privilege of being in their presence for a couple of hours a day, I am a bargain. Shawn: Ever want an autograph from someone?

Jack:  I do not collect autographs

Shawn: What are you working on now?

Jack: I am working on trying to walk without pain.

Shawn: So how about future projects?