As I mentioned in my last post, the first few attempts with the boot was a complete failure.

I used pottery clay to form the boot hoping it would dry allowing me to form the “WonderFlex” over it. Well it was easy to work with to a point but when it dried it cracked. This could have been because of how thick it was in places, but none the less, a disaster. I tried patching the cracks but that too was a failure.

So I opted to use poster board and cut and glue the pattern around the boot. Once I got the shape I covered that with Aluminum mesh. Using a low viscosity mix of Plaster-of-Paris, (1 water to 1 Plaster), this allowed the Plaster to seep through the mesh. With that dry, I covered that with Plaster-of-Paris cloth allowing that to dry. Then I covered that again with a thin layer of Plaster mix (1-2 Mix). When this dried it allowed me to work the Plaster with Sand Paper from rough to smooth and obtain the finish I required for the “WonderFlex” cover later on. 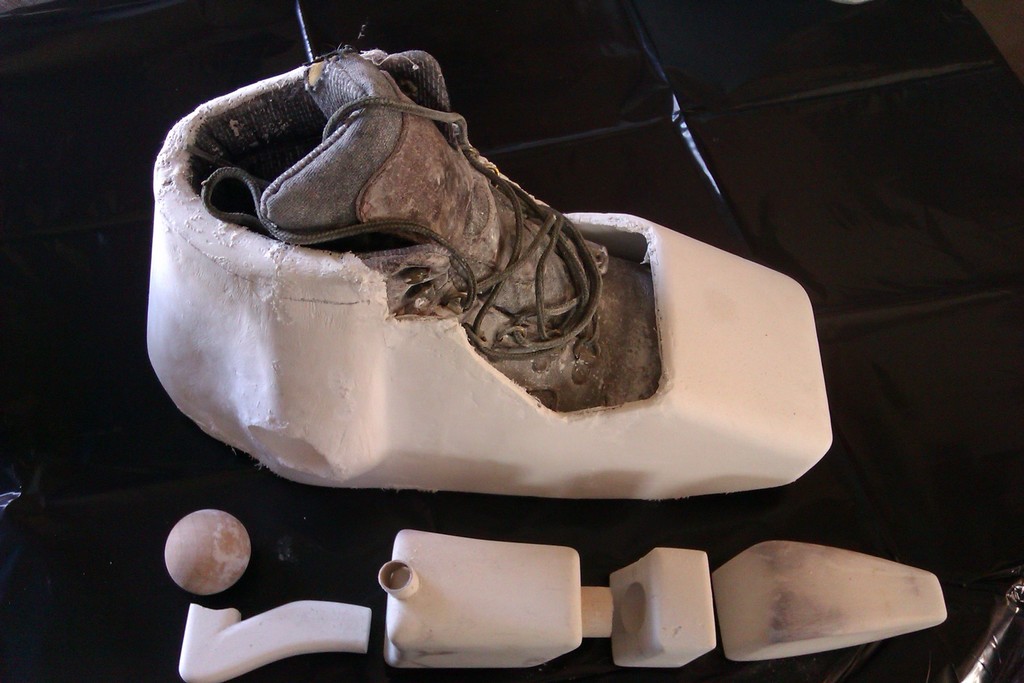 When attacking the side pieces, I thought I could duplicate them with little or no problem but that was not an easy task. Knowing there is 12 pieces in all, the decision to make a “Master Form” of each piece and then make a mold and cast them in Resin, was going to be the only way to go. This I felt would give me the duplication I need and a lot less hassle in trying to get them look the same.

I used “Sculpey” as the Medium and baked them.

So this was the first step.

The next step had me working on the calf section which I will discuss in my next post.

One thing I did learn is to have patience and wait for the Plaster to dry completely before working it. I did not do that and had the damp Plaster break or peel off the lower layer and just created another headache to re-cover. Also when covering a dry layer of Plaster I found out that to make it stay put and stick to the lower layer it had to be dampened first and then the Plaster applied.

By your Command, So say we all.

That's quite a process John, but what you're doing is looking great!!!!! I don't think anyone has tried to create the Cylon from the re-imagined BSG series. Your work is cutting edge without a doubt.

I just remembered yesterday after I left. BONDO! My Uncle has always been into fixing up automobiles and reselling them. They always use Bondo to fill in what can not be undented. That stuff would be perfect for lots of hardened body parts, or body armor, or even models. Just smear it evenly over a surface like 1/4 inch plywood or cardboard, and then sand in the cosmetics. Anyway just an idea. You can get bondo at Wal-Mut or places that sell auto-repair related items.  http://bondo.com/

Good building! So say we all!

Looks good and like you've got a lot of work cut out for you. I believe I remember reading on how they made the body armor for Star Ship Troopers. As memory serves they used Styrofoam and shaved it down for the originals and then molded it for rubber copies. I could be wrong. Also I see some folks are using cardboard and foam rubber like is used to fill in cracks in houses, and then shaving that down. For something a bit sturdier maybe this plywood and a good foam layer shaved down would do. Orrrrr...just plain old expensive fiber glass if you have the skills and can cover up the itch factor. I like the plaster idea. Casts are pretty tough.

ALSO...This guy is a REALLY GOOD model maker. He's a pro at this sort of stuff. Maybe y'all could touch base. He's made some very life like models from scratch with various rubber and plastic polymers, etc. https://www.facebook.com/ray.lawson?fref=pb&hc_location=friends...