Colonials and All Raven Members,

In the spirit of Battlestar Raven's upcoming 5th Chapter Anniversary,  I would like to run a contest.  The contest rules are as follows:

To start off the contest, we will have the following polling categories and then followed by the actual contest category....

1. What do you think is the best BSG episode that really got you holding on to your seat?

4.  Who is your favorite Cylon Model

5.  Who is the best antagonist/ villain charater

-Participants will submit a picture of themselves in their BSG cosplay costume whether it be you were attending a convention or just taking a photo of yourself in you BSG Costume at home.

-The top 5 submission will then be put up in a poll for all the fans to vote on.

-The person that receives that highest votes on the poll, will win the top prize which is the BFC Raven Command Challenge Coin.  This coin is not given out or made available to the public due to the uniqueness of its purpose why it was built for.  And this is one of those occasion.

-The runner up will be awarded the Raven main ship patch.

ENJOY reminiscing back and sharing all your favorite memories of why we all love BSG and at the same time, showing off yourself the BSG way.  GOOD HUNTING COLONIALS AND ALL RAVENS that decides to enter and participate in the contest.  The contest will run at the following dates:

The winner will be selected on the 5th Chapter Anniversary of the Raven Battle Group. The contest will be posted on the Raven Facebook Fan Page at - http://www.facebook.com/BattlestarRavenBFC002  Keep checking on the page for updates.

Hello all Im gonna do it old school for my answers.

1. Best Episode-"The Living Legend" part 1 & 2 with Lloyd Bridges Takes on 3 Basestars, has the Cylons going round and round.

2. Best BSG Flight scene- "Saga of a Star World"- All the squadrons coming up from Carillon to crush the Cylons

4.What is your favorite Cylon-" The Lost Warrior"- Redeye

5. Who is the best villain -" War of the Gods"- Count Iblis- Best line -' You will see your father again to Sheba" 1. Best Episode - "Flight of the Phoenix" - Season 2: Crew exhausted; Cylon "Logic Bomb" computer virus disables Galactica, traps Starbuck, Apollo in the range; Boomer is trusted to save the ship by reversing the virus and infecting the overwhelming Cylon Fleet; Cylon Fleet destroyed in a Colonial "Turkey Shoot"; Chief begins to build a Viper from scratch, ridiculed by the Crew; Crew joins Chief as a Team and create the first "Stealth" Viper; Dying President christens Viper "Laura", not a dry eye in the house.

President Laura Roslin: Doctor, I need your help. But it's illegal, dangerous and in violation of your oath as an officer.
Dr. Cottle: You're a lousy salesman.

Col. Saul Tigh: Four civilian dead. How the frak could this have happened?
Dr. Cottle: What did you expect, genius? You put a pilot in charge of crowd control.

4. and 5. Favorite Cylon AND Favorite Villain - Brother John Cavil. Would make a costume, but no one would recognize it. 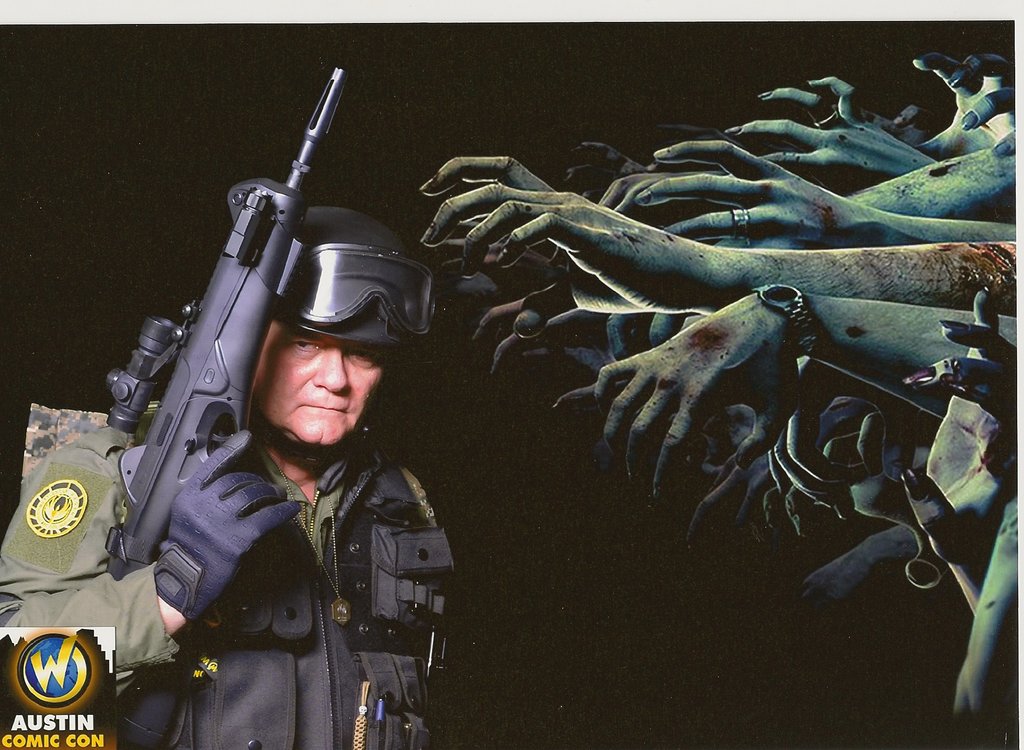 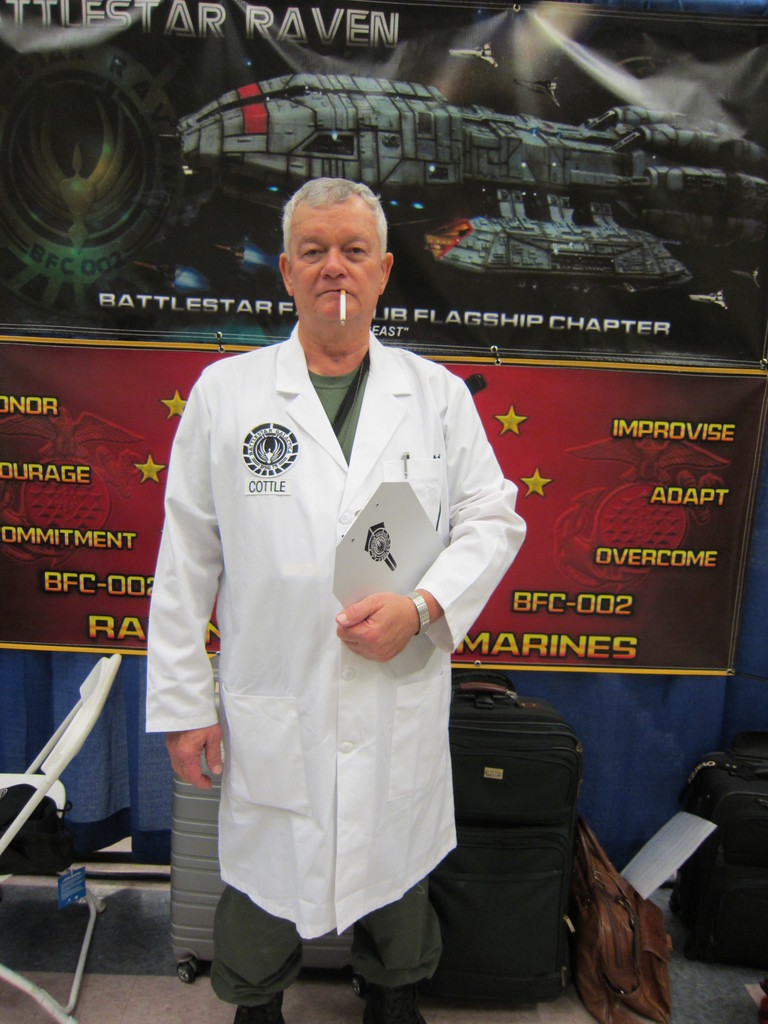 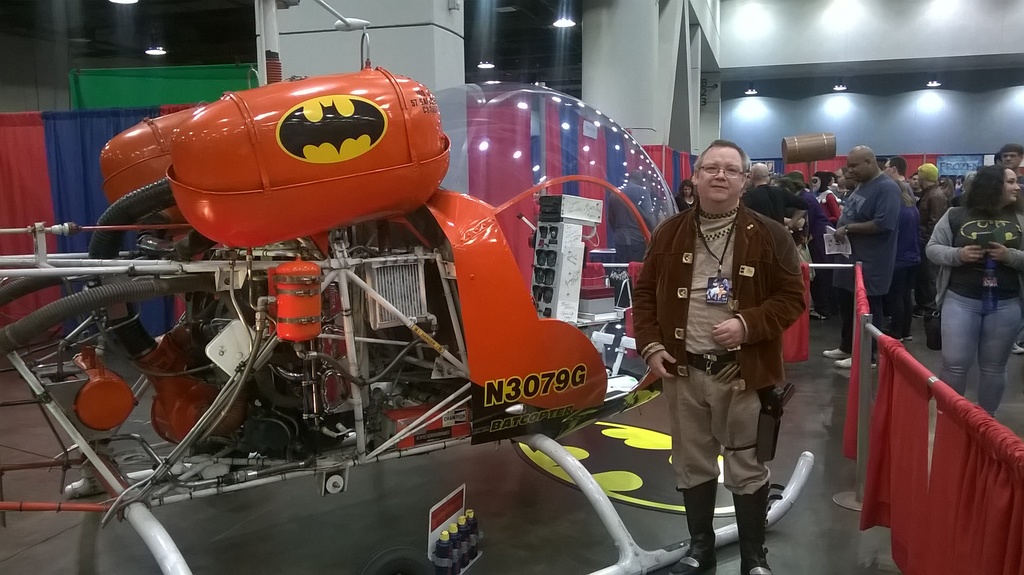 Since I don't have any costumes as of yet, I'll answer the questions. Buckle up, they may tend to get a little long...

1. Best episode/holding onto my seat

That would have to be the season 4 midseason cliffhanger, "Revelations." As a BSG fan from my youth, the main thrust of the story was to find Earth. And first watching this episode, I was literally on the edge of my seat with anticipation, waiting to see what kind of spin they were going to put on Earth. I knew there was going to be a twist coming and I had thought of several possible scenarios. As soon as you see the black soil and the geiger counter going mad, you knew what had happened. Then, the camera pulls back to Roslin and Adama and she softly says "Earth...". Still get goosebumps every time I watch it.

Exodus, Pt. 2. Galactica is taking a pounding from 3 Cylon baseships and the camera pulls back, then two missiles come flying in from left, screen cuts to Pegasus bearing down on the fight, guns blazing! Another chillbumps!

Quote: "Colonel Saul Tigh: You know, sometimes I think you got icewater in those veins and other times I think you're just a naive little schoolteacher. I've sent men on suicide missions in two different wars now and let me tell you something. It don't make a gods damn bit of difference whether they're riding in a Viper or walking out onto a parade ground. In the end, they're just as dead. So take your piety and your moralizing and your high minded principles and stick 'em someplace safe until you're off this rock and sitting in your nice comfy chair on Colonial One again....I've got a war to fight."

My favorite character has always been Saul Tigh and since he turned out to be a Cylon, well, there ya go!

Well, since there's only a few in the reimagined series, I'll go with Baltar. However, he is more portrayed as a sympathetic villain...one who didn't willingly betray the colonies, it was only due to the lust of a woman. There was so much more that could have been done with his character, whether good or bad, instead of leaving him just straddling the fence. Now one of my favorite villains from the original show was Count Iblis. I was for sure seeing the religious take the reimagined show was going for, we would get to see Iblis in some fashion. That whole War of the Gods storyline would have played perfectly near the end of season 3 or instead of that weak mutiny storyline in the 2nd half of season 4.

Awesome submissions so far Ravens!  Keep it coming!  Also, I will be flying in soon to Texas for the Dallas Comic Con this weekend.  I will be tweeting live and posting from onsite.  I might even do live streaming via Ustream.  I have activated the Ustream outlet of the Raven Battle Group which is now on the front of the Raven Main site-  http://www.battlestarraven-bfc-002.com  You can watch things live from there.  Hopefully my Ipad battery last long.  I have unlimited data on my Ipad which will make it easier for me now to do live broadcast on Ustream.

1. What do you think is the best BSG episode that really got you holding on to your seat?: 33 because the episode was so intense and you really got brought into all of the emotions with the cast. Can you imagine being in a sleep deprived state so even if you tried to sleep you couldn't because bam there are the cylons again.

2.  Best BSG fight scene: Scar. The flying with Starbuck and Kat against scar was great. Then Starbuck led Scar into the target path for Kat so she could get the kill.

3.  Best BSG catch phrase / quote: What do you hear? Nothing but the rain. Then grab your gun and bring in the cat. Boom, Boom, Boom! / Wilco/ Aye-aye sir!

4.  Who is your favorite Cylon Model: Caprica 6/head 6

5.  Who is the best antagonist/ villain character: Admiral Helena Cain. When the Pegaus showed up and rattled everything that Adama and the Galactica had managed to do with the fleet not to mention shake up the crew by transferring members to the other ships and splitting up a well oiled machine it made alot of people dislike and even hate her. I know I did watching the show.

This is a photo of me and a good portion of the cast from Dragon Con 2015. I am in my Duty Blues and I have to say this is my favorite photo I have. 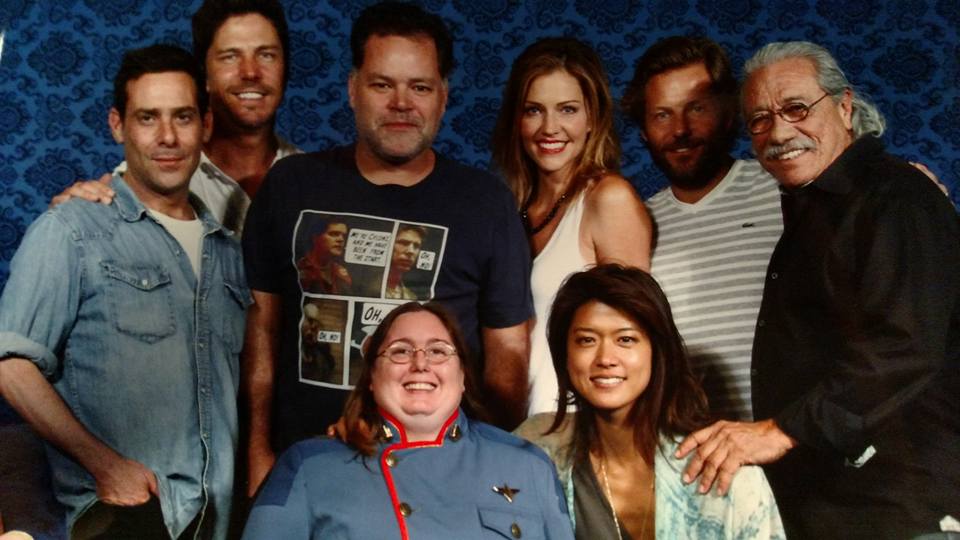 I don't have a BSG cosplay, so this is just for the answers.

1) 33, because of the dedication that the cast put into it (Actually, sleep deprived!), and the absolutely hopeless feeling it put into the show, plus it was so tragic to see if Apollo would have to shoot down the Olympic Carrier.

2) Battle of the Tylium Asteroid, due to the amount of true tactical planning and care that went into the operation.

3) "This is the Admiral/Commander/XO", because you KNOW something's going down or there's an incredibly inspiring speech coming up.

4) I have a personal preference toward the Fives because of their ability to blend into life and take on a plain and seemingly behind the scenes role to sow chaos.

5) Favorite Antagonist: Gotta go with Tom Zarek because of how he absolutely played the colonials for everything they were worth and how he knew when to back down, when he was beat.

5) Cavill has the SLIGHT Edge over Leoben,since Cavill was more the Anarchist,and Leoben was more of A Mind-Twister(in the Beginning).

Unfortunately,There's Little Chance I'll have My Duty Blues Ready until the Fall.