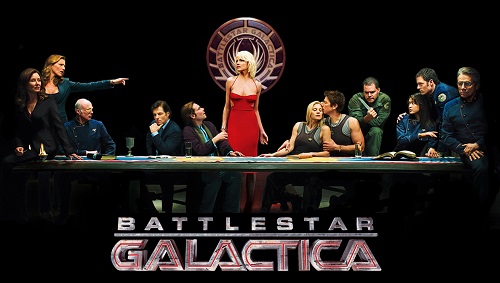 Universal is ramping up a movie version of the sci-fi franchise “Battlestar Galactica,” aiming to develop the film as a complete reimagining of the story.

“Transcendence” writer Jack Paglen has signed on to write the screenplay. Paglen has also committed to Ridley Scott’s “Prometheus” sequel for Fox that will start production this fall.

There have been three “Galactica” TV series (including the brief “Galactica 1980″). The first, starring Lorne Greene and Richard Hatch, ran during the 1978-79 season and was centered on humans engaged in a lengthy war against a cybernetic race known as the Cylons while searching for Earth.

In 2009, speculation emerged that Bryan Singer was attached to direct a “Battlestar Galactica” movie.

Universal’s exec VP of production Scott Bernstein and director of development Jay Polidoro are overseeing the latest version of “Battlestar Galactica” for the studio.

Paglen is represented by ICM Partners and Lichter Grossman Nichols Adler and Feldman. Larson is represented by the Lichtman Group, manager Denny Bond of Management 3 as well as attorneys Neville Johnson, Douglas Johnson and James Ryan of Johnson & Johnson.

I hope the cast will be the new cast. would be nice to see kara and lee back again!!!!!

Of Course, That Doesn't Mean Singer WON'T Direct; And, If They Want To Go With A Whole New Cast, Here's My Recommendations:

Will Smith As Lt. Boomer

I Know this All Sounds Fanciful, But, You Gotta Admit, It Would All Be Brilliant Casting!

I'm sure we ALL wait with eager enthusiasm!