I was saddened to hear of the passing of actress Grace Lee Whitney this past Friday as I'm sure all of you were.

She was unforgettable as Yeoman Janice Rand on the legendary & original Star Trek.

Of course she did more than Star Trek...matter of fact her first on screen performance was in the comedy masterpiece "Some Like it Hot" starring Marilyn Monroe.

Probably a lot out there might not know that she also appeared in the Batman television series with Adam West, but perhaps the role that we will always remember her by will be in Star Trek. 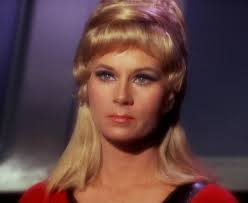 Having met & talked to her, I can see with all honesty that she was a truly nice lady...she was even my dinner partner in New York City!

Long story short on that one...we were both at the same Con back in 1999 & a group of us went out for dinner at a Japanese steak house & we were seated next to each other...totally interesting conversation.

That led to continued contact via phone and ultimately to a really great interview that I did with her about her career.

In the next couple of days I will share the transcript of that interview with everyone.

Needless to say she was a true winner, battled some demons in her life and overcame them and emerged a stronger person for it.

Grace, you will be missed!

“Second star to the right and straight on 'til morning. ”