What can I say about Comic Palooza, Houston, Texas...Hmmmmmm

Well first off, it is my first convention back after three and half close to four years of hiatus from attending conventions due to real life responsibilities.  And I might say, what a come back!  I have not had this much fun after a long time.  From imitating and posing with people in their own unique costumes to talking with fellow fans of Battlestar Galactica and signing them up to the site (This was a success). It was was such a joy talking to other fans.  I even ended up giving a fan, one of my three BSG Junior Pilot Wing  because mine was made from good quality material. I told him he better keep is safe considering a lot of people were asking if the items that I had on display was for sale. He was very thankful and had a big smile on his face.  That to me was enough thanks!   The pins and dog tags on display were from my own personal collection and were not for sale.  I think I must have talked myself out in those three days compared to when I am at work. :-)  Also, it was such a pleasure meeting Richard Hatch and Anne Lockhart for the first time upclose courtesy of Shawn ODonnell.

On the first day of the convention, as I was manning the BFC table while Shawn ODonnell conducts some business, out of knowhere, Shawn shows up with Richard Hatch by the table and introduce me to him.  I did not know what to say or how to react. I have never met the man before. After being introduce to him and seeing him throughout the whole entire convention, he is nothing like his character Tom Zarek on Battlestar Galactica.  Tom Zarek is someone I wanted to strangle so badly for being so devious on the show.  Richard Hatch was a very pleasant, outgoing, funny, and a character to be around with.  I like that kind of personality because I have a personality like that too on the side that not too many people know unless they know me very well.  I like to talk to people and have fun.  That is the real me when I am not in uniform.  Also, Shawn had told me ahead of time that Richard Hatch was a champion "thumb wrestler"!  I about laugh my butt off because I could not believe it. But little did I know what was going to happen later.

One thing that really stood out to me was on the last day of the convention after it ended, Shawn and I joined Richard Hatch at his hotel for a little drink.  We all chatted things that we can do which will all lead to next year Galacticon 3.  The conversation was full of laughter.  I am not going to even say what funny things Richard Hatch said about Shawn to me.  My mouth is sealed on that topic LOL!  Out of knowhere, the subject of "thumb wrestling" was brought up by Shawn.  I stated to Richard I found it so funny and could not believe it when Shawn told me he was a "thumb wrestling" champion.  So Richard Hatch turns around to me and told me to give him my hand.  He challenge me to "thumb wrestling".  Well, little old me was more than willing to oblige LOL!  So here we are doing some "thumb wrestling".  Bodies moving along with our hands trying to out do one another.  Well, dammit, I accidently slipped of the edge of my chair a little bit and Richard ends up pinning my thumb LOL!  Now I want revenge!!!!!!!! OOOPPPPPPSSSSS!  Did I say revenge....I meant a rematch! Hehehehehheh!  So I cannot wait until next year 's Galacticon 3 to see him again.  I will have my rematch!!!!!!!!!  Hopefully my real life responsibilities will allow me to have the time to do so.  But it is mark on my calendar as "MUST" attend convention for me.

The CONS about the Comic Palooza Convention that really was number one in my eye was that the food was too DAMN expensive.  So in my personal humble opinion, for all people wishing and planning to attend the Galacticon 3 Convention next year that has a budget, I would select the package that includes everything. The reason why I say that, it will save everyone a lot of money for it would be a lot cheaper buying the higher end package deal, rather than buying the things you want to do on the convention separately.  The higher end package will also be a lot worth it for people that is not local. It will allow you to do a lot more things with the celebrities and make your time worth while and get your money's worth without costing you extra money to do so.  I know that is what I will be doing because I have three children that will be accompanying me next year if my schedule pans out.

Well, I hope everyone can make it to the Comic Palooza, Galacticon 3 for next year.  If you only know what is being planned, you will want to be there.  It will be something that you all will never forget for it will be a lot of fun.  And for all people that knows me very well, I am very straightforward individual! 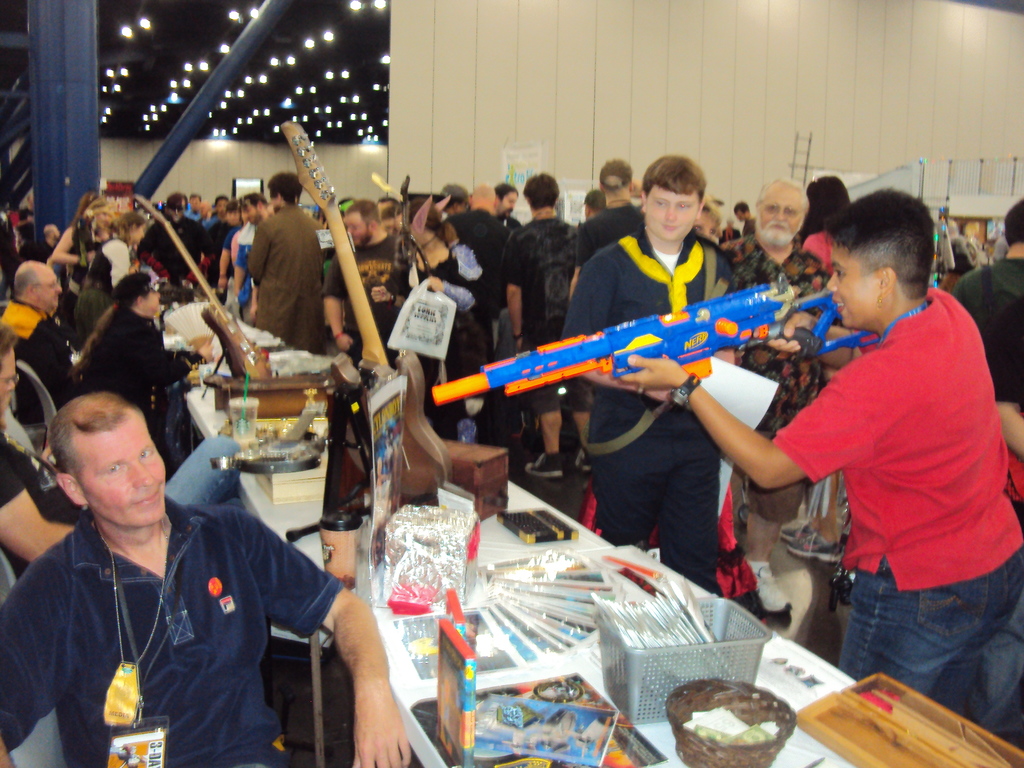 " Mr. President, I will say it one last time! Are you a Cylon or are you not a Cylon!  Confess now!"

LOL, thanks Kerry!  Oh I certainly am looking forward to a thumb rematch between me and Richard.  I nearly fell of my sit trying to outmanuever Richard on the thumb wrestling match. HEHEHEHEH!

As far as the picture, I love the look Mr. President gave me when I pulled this stunt on him during the Comic Palooza in Houston.  I can be a prankster at times.  I like to have fun attending conventions. That is just me :-)

I look forward to meeting you in person next year.  Hopefully you can make it. :-)

Everyone here in Australia has had a Thumb wrestling with Richard at some stage during one of his many trips here.  Enjoyed reading this post.  I'm looking so forward to Galacticon 3 next year to be at an event that is for BSG fans will be a blast I'm sure.

Don't believe a frakkin' thing Richard said about me! Lol!...& bravo, I love this article...you really captured the moments.

...I WAS witness to the thumb wrestling turney...a good fight was fought, but I must admit my buddy Tom Zarek did defeat the DragonLady...BUT...we are looking forward to next year...the battle of the century! Thumb Wars is On!!!!