Ron Moore graciously took some time out to answer a few questions about things BSG so we could share with all of you.
This is kind of a retrospective...I did an interview with Ron at the beginning of the Re-Imagined series run & I thought it would be fun to "look back"...and as they say...it has happened before & it will happen again...
A big thank you to both Ron Moore & Ben McGinnis on this one..thanks guys!
So on with the show...or rather, THE interview... 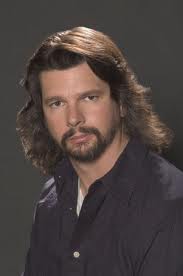 Shawn: It's been a while since we last talked...at least in a public interview...then we were talking about the re-imagined series when it was on air, now that it has been off air for a bit, what is you're perspective on it's legacy?

Ron: I don't really know what the legacy is at this point.
I'm happy to see the show is still talked about and that it seems to have a life beyond the original run, and for now that's enough.
I just didn't want it to be forgotten.

Shawn: Back in 2003 you attended the first Galacticon at the invitation of Richard Hatch...and you faced a crowd that was somewhat dubious of your intentions for a "rebooted" version of the show they loved "as it was"...& you brought a lot of folks onboard with you then & there in the process...do you feel somewhat "vindicated" for lack of a better description that the show was met with so much acclaim & amassed such a big following...& furthermore that a lot of people who were originally doubtful actually liked the re-imagining?

Ron: I do feel vindicated in that sense.
There was a lot of skepticism about what we were trying to do, within and without the fan community.
There were a fair number of people in the entertainment business that smirked or snickered when we announced what our intentions were, so yep -- I feel like I got the last laugh

Shawn: What's  your personal take on the back & forth regards "Blood & Chrome"?
The fans really seem to want it to be televised...yet Sy-Fy seems inclined to make it a webisode event...so what do you think?

Ron: It's been up and down so many times, I've lost track of what the current plan is.
The entire project began life as an attempt to do something via the Microsoft Network for distribution on their XBoX system and then it's gone through various permutations of distribution right through the filming.
I stopped being involved early on and I really don't have any direct knowledge of what the current thinking is or when they'll make a final decision.
But it seems reasonable to assume that it will be shown eventually in some format, somewhere, so stay tuned.

Shawn: Bryan Singer has been making moves to bring BSG to the big screen....essentially resurrecting his plans from 2001 to bring his version (along with Tom DeSanto's) to the air...or screen in this case. Opinions on that?

Ron:I have nothing to do with the Singer feature and no comment on it other than good luck with it.


Shawn: Fair enough..but as a follow up to that question....it seems that with a Bryan Singer version we might just be looking at yet another interpretation of the BSG universe...differering yet again from previous versions. In your opinion, what is your take on that? Arguably BSG has taken form in many different "universes" & probably more than most franchises with this venture…

Ron: I've always felt that the central story was strong enough that it could support multiple takes on takes on the material.
Someday, I'm sure someone will do yet another iteration and I'll be curious to see it when they do. 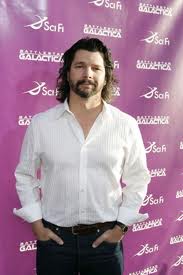 Shawn: Given the opportunity, what would you like to do with BSG now....or for that matter in the future?

Ron: I finished the story I was trying to tell, so I'm done for the moment.
In the future, I could see revisiting Caprica and trying to finish that story or revamp the concept in a different way.
I also think the First Cylon War is an interesting period to explore and it would be fun to play around with that saga.
But again, it's not on the horizon.

Shawn: A couple of months ago we were contacted by Fred Armisen from Portlandia and were tickled to help promote that show's "One Moore Episode"...did you have fun doing that?

Ron: I had a ball.
They were incredibly gracious to the three of us during the shoot up in Portland and I was personally very flattered to be asked to appear on the show.
The entire Portlandia team was fantastic and I'm a big fan of their show.


Shawn: What's on the horizon for you now?
Fans out there....I know...would like to know… Ron: I'm in development, as they say.  I'm about to start pitching a variety of projects to the networks, both cable and broadcast.  Some genre, some not, some solo, some not.  Check with me again in the Fall and I'll have an idea of what's looking likely to happen.


Shawn: Do you want to do more espisodic televsion that has a central mythology...something that like BSG has an overall basic "this is your destiny" feel & this is how you get there.....?

Ron: Sure.
I enjoy that style of storytelling and would love to do it again.
I enjoy the process of creating a universe and an over-arcing mythology that operates within it.
Shawn: Speaking of that...with the phrase of "This has happened before & it will happen again"...I think the last time we did an interview, I asked if you had advice for people trying to break into the film business...so I'll ask it again....what suggestions or advice do you have?

Ron: As always, I tell people that the key to breaking into the business is combination of talent and a willingness to persevere in the face of rejection.
The business will throw obstacles in your way and make you feel worthless and untalented at every turn and you have to be willing to move over, around, or through those obstacles over and over again.
It's just a relentless tide of "No" coming at you.
But if you've got the goods, this town will eventually find you because genuinely talented people are hard to find and everyone is looking for them.

Comment by John David "Buzzsaw" Feagin on July 19, 2012 at 4:56am
I just wanted to say that I really liked BOTH versions of BSG. Each had its own audience, but the basic story line remains the same. In my own little universe, I like to reconcile and possible discrepancies by putting the re-imagined series first in the time line, since it ends up on Earth thousands of years ago, and the original one in the near future. Going along with the cyclical rising and falling of human civilization, it makes perfect sense that way…”All of this has happened before, and will happen again…and again…and again…and again…” Each time, human colonists have been nearly annihilated and scattered across the galaxy…Some make it to Earth, while others hunker and hide until they can rebuild their civilizations here and there. In the original series, small settlements of humans were encountered…who were going to “Earth” or else were fleeing from the re-imagined series. It also makes sense because eons ago, other humans made the same basic trip, and thus as the re-imagined series ended…there were inexplicably already some humans living on “Earth.” This story can replay it self countless times, with each one only vaguely knowing of past Cylon wars, and colonizing humans, either searching the galaxy during when times were good, or fleeing and hiding when they were defeated. I also like to point out lost civilizations here on Earth…and possibly Mars…Those mysterious pyramids under the ocean…Those archaeological structures on Mars, the historical myths and legends that have been passed down over the ages here. Sooooooooo much “forgotten” history! :o)

Also…the Cylons…In my personal little reality, they were invented by humans with mental downloads as shown in Caprica…and thus were human enough to rebel. Later between the BSG stories, the Reptilian Cylons and the evil Count Iblis used them for their own purposes, and humans believed THEY were the creators of the “toasters.” The Reptilian Cylons had no use for human Skin Jobs, thus they are no longer a part of the story during the “original” series. Oh…and what of the new version of Centurions that went to evolve on their own? What might they have become and done? Did they also enjoy genetic engineering, seeding planets with humanoids of different alien species, like in the other Science Fiction stories such as Star Trek and Star Gate? Did they eventually evolve into a technozombie race known as the Borg? What happened with them? Maybe they just watch and when humans become advanced enough to be a perceived threat, knock us back into the stone age. Soooooooooooo many possibilities!

I truly wish everybody that wants to put their own spin on the story the very best of hunting possible…and I CAN’T WAIT to see what Richard Hatch hatches up for us! It’ll be GREAT!

So say we all!
:o)
John David Feagin