Close up of Imperious Leader deleted scene from series 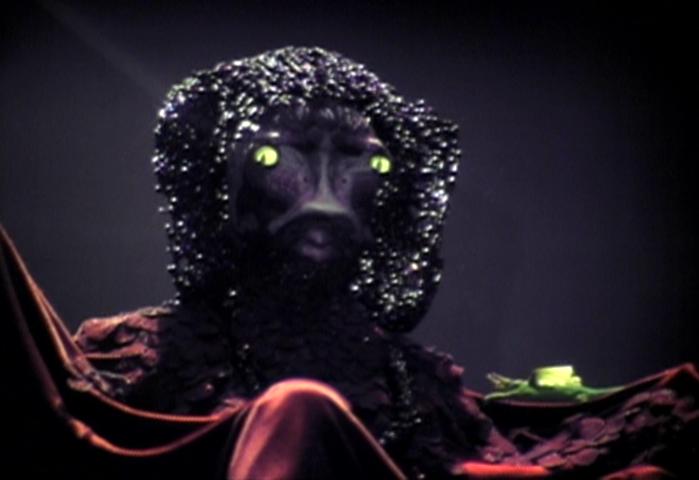 Hello, all..sorry to have been a way for so long..health issues  prevailed...

Although I may stating the obvious..." Iblis"  portrayed by Patrick McNee/Imperious Leader's voice..in Islamic legend, Iblis is the name of Satan, the Devil....how I wish this story line would have been more explored...good vs evil, and biblical,  very thought out writing research.

Hello.all! There is an interesting website with original BSG trivia and little known facts:
http://galactica1981.tripod.com/Facts.htm Cool stuff..struck me odd when The cost of The Imperious Leader's costume was $50,000..but Glen Larson hated it...so there were no close ups of his face in the series..what a waste. I did learn that the "afro"on his head was not hair ...it was an 'iron woven' headpiece/cowl/crown combination.the sculted… Continue

I wonder if the Saturday Night Live characters "The Coneheads" inspired the look of Lucifer (Cylon IL series).

Hey,gang.Ok, here's my satire on how BSG and Knight Rider tie in. (Indulge me) In the Galactica 1980 episodes "The Night the Cylons Landed" A Cylon Centurion and a humanoid Cylon plummet from the top of a radio tower into a dumpster.The dumpster is collected and brought to a waste recycling plant owned by Wilfred Knight. After the Cylons are discovered, they are reversed engineered by Knight into the form of a car,which he names KITT.The most  recognizable features of the alien technology…

Felix Silla (Cousin Itt -The Addams Family) was the person under the robe of Lucifer..the voice was of course ,Jonathan Harris.

Dennis Haysbert ..the spokesman for Allstate Insurance Company.("Are you in good hands?....That's Allstate's stand")was the voice of The Imperious Leader in episode #9 "Space Croppers"  of the Galactica 1980 seies.

Murray Matheson, the Australian actor (recognized as "the clown" from the Twilight Zone…

Another interesting entity in the BSG series for me was Lucifer, the IL series Cylon droid and futuristic mechanical,not-to -be trusted henchman to The Imperious Leader and Baltar.So much detail and thought was put into this "background" character. .His head(looked like a big Christmas tree bulb) was an amazing art work of electronics and lighting( even if the body was covered up in robe attire..maybe that's where the budget maxed out!) Wonderful , eloquent, conniving, fork-tounged voice…

About The Imperious Leader

I must admit, the most intriguing character to me is the Imperious Leader.Such a mysterious, dark, tantilyzing character in the Battle Star Galactica anthology. From what I understand,he is a machine entity created by the Cylons in the image of the extinct Cylon race of reptilian creatures. Magnificent voice courtesy of Patrick McNee...such a melodic,hyptnotic, calming voice that commands attention, but leaves you unaware of the true evil that is it's source..used to give me goosebumps just…

Hello, all! I'm trying to remember a tv special version of Battle Star Galactica, back in the late seventies or early eighties(?).It started with a NASA astronaut doing a spacewalk and catching a book that was floating in space. As it was opened, it revealed art drawings of the reptilian Cylons and Lorne Greene's voice over telling the story of the creation of the machine Cylons and the Imperious Leader..the rebellion of the machines.....I can't remember much more than that, I believe it…