Uezen - a science fiction novel published  in the USA  by my friend Snowdon King.

"Democles and Z’Davaar, standing for God and the Devil respectively, have agreed to create the first humanoids on Eden. The Edeneans spread their race throughout the galaxy by Light ascension and creating other forms of life. However, when the most important sun in the system turns into a supernova, they start, for the first time in their existence, to fall ill and die.
In order to prevent utter extinction, they build Arka and head for the nearest wormhole, Megarra. But to reach the new destination, they have to face Anuk, who has agreed to obey Z’Davaar’s orders and destroy the other Edeneans, hoping to resurrect his lover, Asiria, who dies during the journey.
It is only the Earthman Lerman Kruger, a survivor of the Earth pandemic, exiled on Nede, a desert planet, that finds the strength to fight, with the support of the Edeneans in that corner of the universe, Uezen and his wife, Mud … The latter create an army of disciples to stop the forces led by Anuk, the dark Edenean who, through the power of drugs and mental influence, conquer planet after planet.
Under the circumstances, Namur, Lerman and Suara’s child, the possessor of Uezen’s consciousness and several matchless paranormal powers, becomes the great hope of Good and Light. But Namur, influenced by his love for Luana, has his weaknesses too and becomes the target of the malefic Anuk’s mental attacks.
During the outer space battle close to Nede, there comes a fissure between the material universe and the nether world. This fissure is brought about by the Earthmen’s encroaching upon the protocol between Democles and Z’Davaar, the former managing, by means of a scientific experiment, to capture the dead people’s souls and create an unprecedented weapon: the soul bomb. Thus the universe is invaded by the creatures of Darkness, the shadows and demons of Obscuris and the Purgatory, that are being chased by the angels led by Ethiel, Democles’s right hand.
What’s going to happen in this two-front battle? Who’s going to win? What are the sacrifices each side has to make? All these answers you’ll find by reading Uezen. ... A philosophical science fiction adventure that spans the entire galaxy! "

You can buy the book from the Amazon site, here:

or buy the E-Book version from here: 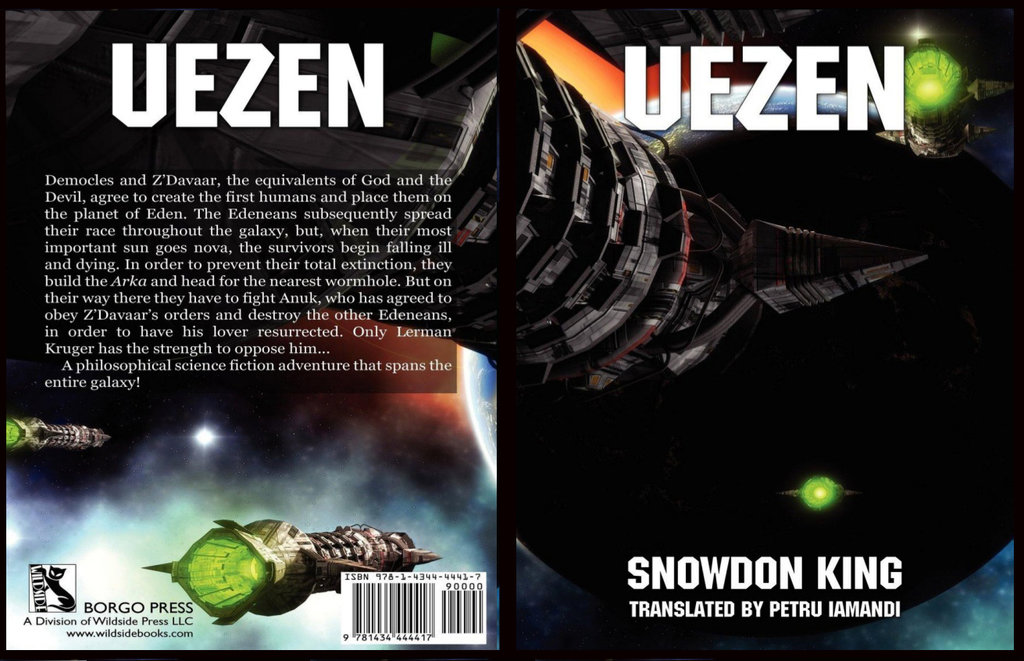