lets keep hittin there thinning out some

we got a lot of activity ground

Missiles ready, let's give them hell

(Nuke One Ready to Fire)

LSO, this is raptor 352. Requesting clearance for landing……..over……

(deck Hand Salutes) (Sir, We have A Case of Snake Meat On your Raptor Ready Sir) Thanks! Well, Guys, We Got our Own Store to Mind, So, We'll See Ya Around.

You recycled your share of local bad guy talent..... including about a thousand snakes in the pick-up zone.....thanks for the ride.....

Last Night with the Ravens

Last Night with the Ravens (Part 1)

Read on and see what happens when a Flock of Ravens get together. The questions fly about anything and everything. Then just when you think it’s coming to an end, The Cylons decide to spring a sneak attack to neutralize the Ravens.

Don’t skip a word of this very interesting chat session and make sure you follow it to the very end to see how it all works out with, “Last Night with the…

Part 2 Last Night with the Ravens

Part 2 Last Night with the Ravens

Watch it, reamer, you got a stray sniffing your tail.

Team Zoe Viper Raffle comes to an end at G4

I would like to personally Thank Everyone who took part in the Team Zoe Raffle. The first prize which was the Moebius 1/32 scale Mk-II Viper built by myself which included a display case that was autographed by Tricia Helfer, Kate Vernon and Michael Hogan went to Rod who lives in the Seattle area.… 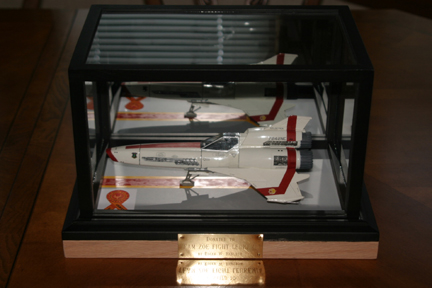 This mission was planned by the Ravens CAG, Colonel Leonidas Ranson using an idea from our last mission Operation Green Haze and the irradiated Tylium on Planet EM.

Well Folks, The Cylons Are about to attempt some Trickery on us; Guess what? It's THEY who are about to get 'Punk'd'!

After the Last Op at planet 'Green Haze', The Scientists at the Ministry of Defense Have…

Raiders jumping in on…

TEAM1...there’s something moving if it’s moving n shiny drop it

Colonel Leonidas, Battlestar Ravens CAG asked me to plan out next mission using Episode 10 (RDM) “Hand of God” for inspiration. That episode has always been a favorite of mine, but I didn’t want our Vipers hiding inside the Movers Ship and I substituted the asteroid for a…

We're going to show these toasters what we're made of!

(Minotaur Lead, M1 has Landed on Front of THETIS)

Roger 316, Tell Raven to Have that Nuke Warmed up In the Tube (Roger Cag, Raven Reports Target Locked In)

Ethan Tell is a small time crook that makes a big-time score when he steals 1 million dollars. Ironically, his life radically changes for the worst when he discovers that stealing the money…

In just 11 days, our favorite Cylon, Tricia “6” Helfer embarks on the USS Ascension the original Sy-Fy Mini Series. It’s almost as if Tricia’s part was custom tailored for #6. Her part is the beautiful, manipulative and…

Earth is at the brink of extinction due to extreme climate changes. A mysterious rip in the space-time continuum is discovered. It may be the last chance to save the human race. The crew of the Endurance uses the newly discovered wormhole on an interstellar voyage in a last ditch attempt to…