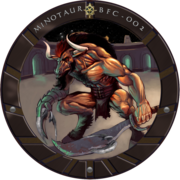 The Minotaurs pride themselves as being the most guerrilla warfare minded squadron in the fleet. Minotaurs are famous for using asteroid fields for cover fire and ambush points for Cylon raiders. We strike fast, we strike hard and then fade away. To try to hunt the the Hunters is an exercise in futility. We are the best. You are now in the maze, find your way out.

Here is a little history about the Minotaur:

The Minotaur (Ancient Greek: Μῑνώταυρος [miːnɔ̌ːtau̯ros], Latin: Minotaurus, Etruscan Θevrumineś), was a creature with the head of a bull on the body of a manor, as described by Roman poet Ovid, "part man and part bull". He dwelt at the center of the Cretan Labyrinth, which was an elaborate maze-like constructiondesigned by the architect Daedalus and his son Icarus, on the command of King Minos of Crete. WHO AMONGST YOU consider yourself the Best of the Best and wants to earn your place amongst the legendary pilots in the Colonial Fleet?  Who wants to earn the distinction of being called THE TOP GUN and cement your legacy as part of the Elite Group of Pilots.  Then step right up and take your Viper and Raptor test.

THIS IS HOW IT WILL GO:

Any one who would like to fly a Viper and join this group must first download the Viper Training Manual and complete the multiple choice test at the end:

Upon completion of the test, submit your answers to Admiral Rivera by E-mail at this address: cag_vf84@yahoo.com Admiral Rivera will grade your test and E-mail your score to you in a couple days.

AIM HIGH!  Aim for a perfect score for yourself because you know you can do it.

Why would I want to join the Minotaur?

One of the things that makes the Minotaur special is the fact that we are taking the forethought and the idea of role-playing the idea of being something more that just the standard Mark II or Mark VII Viper Jocks. We are looking as a squadron to be outfitted not only with a cache of Viper Mark VII but with the Viper Mark III as well. The tactics that the Minotaur employ uses the Mark VII fighter as a bait and chase fighter to make the Cylon Raiders come to the battlefield of choice for the squadron. Once the Chase fighters pass through the kill zone the Mark III's swoop in with the heavy armament and dispatch the Raiders as quickly as possible.

The thoughts that the squadron has come up with is to have our deck crew and our quartermasters acquire us not only the heavier amored Viper Mark III but we have fitted these Mark III' s with high speed mini-gun cannons. We have fitted these weapons in the nose cone of the Mark III. This does not affect the stability of the fighter. What it does is not only allow the pilot to use the regular cannons mounted on the side of the Viper but it allows a heavy burst of firepower to take out any Heavy Raiders that may appear in the engagement. If we are in full ambush mode the normal Cylon Raiders are turned into space dust in less than 30 seconds of sustained Mini-Gun fire.
The main reason for the configuration of the squadron is to immolate the current 51st Operations Group which houses both the 25th and 36th Fighter Squadron of the United States Air Force. The reason I chose this Group is to one, find a squadron that is still using the A-10 Thunderbolt which is being used by the 25th upon which we are basing the Mark III Viper on. The 36th are using F-16 Falcons which are one of the fastest fighters in service to the Air Force at this time (The Joint Strike Figher not withstanding). The second reason was to find a Squadron symbol of the "past" that was not a Flying Tiger. As such the tail wing of our Mark III and Mark VII Vipers are painted in a Checkered pattern in Red and Black to be our own version of the tail wing that is displayed by these Warriors.

There has been some confusion as to when new nuggets can assume the rank of Ensign. According to Command, immediately. So once you send your scores off, you can assume the title of Ensign and use it…Continue

As you send your scores to Admiral Rivera, please be sure to include the state (or country) in which you reside and the type of craft you wish to fly, Viper or Raptor. This information is used to…Continue

Hi Everyone,I while back I was thinking to create a few fictitious pilots and I needed call signs for them. Since none of us can die in the Battlestar Universe, I planned to have a few of the make…Continue

You need to be a member of The Minotaur to add comments!

Fleet Admiral Rivera has set a mission for the Air Wing!

Let's show pride in the Air Wing and get this mission done!

With the 20th anniversary of the BFC quickly approaching, DragonLady has challenged the leadership to be more visible and active and set an example for current members, new members and fans that may browse our pages that are thinking of joining. Putting on a united effort also shows other fandoms that the BFC is strong in keeping our little niche in the sci-fi community going strong. We cannot pull strong together if some parts don't pull their weight. I've noticed that there are squadrons with little or no activity since I took command of the Air Wing and it is time for that to change. I will begin by referring you to the Squadron Commander's responsibilities link:

I totally understand the outside world sometimes puts constraints on our time and what we're able to do here. However, several squadrons only activity recently comes from posts I have made and this is unacceptable. If you can't find any free time to contribute, appoint an assistant squadron commander to help with the load. If the inactivity continues, I will consult with command on possible changes in leadership of these inactive squadrons. Be advised that I would like to see a few new responsibilities added. One of the requirements of SC's is recruiting your squadron. We want to see SC's welcoming new members on the fan page and actively recruiting to your squadron. Second, I'd like to see each squadron starting to hold regular CAPs. This helps bonding within the Squadron and helps to build friendships. Remember, you accepted the SC position and the responsibility it incurred. Now is the time to step up and help the BFC shine!

Just a refresher for Squadron Commanders:

As you may have seen on the club's Facebook page, it's time for the Air Wing to dust off the cobwebs and get back to our business of killing toasters!

PILOTS: Report in and sound off so we can get an accurate count of active pilots!

Squadron Commanders: Get a list of these active pilots, we are currently trying to make a status board with each squadron and their active pilots. Also, remember to recruit your squadron. Welcome the new nuggets so we can fill out the squadrons evenly. We're not going to be able to plan missions and CAPs if we just have 2-3 people to show up at a time. Together we can make the Air Wing proud!

We plan to have two training CAPs on October 6th...one at 2pm Eastern for our members in the UK, and one at 8pm for US. If you are a new pilot, we hope to see you there to show how the Caps go....and to have fun! The only requirement is to make sure you have a copy of your Viper/Raptor startup checklist handy. I will be leading one and assistant CAG, Joseph "Vampire" Vogt, will lead the other.

Command has authorized the position of Assistant Squadron Commander for each squadron in the Air Wing. This position is essentially 2nd in command for the SC. Requirements remain the same as for Squadron Commanders, which can be found here:

If you are ready to take on the responsibility, contact your Squadron Commander immediately!

ATTENTION ALL PILOTS!!!!!!!!!!!!!
If you plan on participating in the Gunstar Trireme anniversary Op, please contact Col. Keith "Leonidas" Ranson and advise which date would be best for you, either August 20th or 27th.

ATTENTION ALL SC's AND PILOTS:

I want to address the issue of responsibility on social media. This concerns all personnel but as SC's, we all have a responsibility to the club not to put anything out there that may could possibly show us in a bad light. The main problem comes from several incidents, at least one I can remember since I've been a member, where other clubs or organizations have used postings by members to detriment the club. If you have an issue with Command or other members, just remember..."TAKE IT TO PM!!!!" If you have any questions or concerns about this policy, contact me anytime. Thank you!

Spartan SC Ens Natalie "NAT" Hallam is hosting a Quiz Night in Raven Chat on Sunday, April 9th at 7pm EST. Hope to see everyone there!