Decide the Path of Battlestar Raven

Having just survived the Fall of the Twelve Colonies of Kobol, the Raven stands at a crossroads: Shall we flee or stay?
This decision will determine the long-term goal of Battlestar Raven and thus, the theme of future chapters.
VOTE HERE: https://www.strawpoll.me/16733152

Staying in the Cyrannus System: THEOMACHY
By choosing the path THEOMACHY, the Raven will dedicate itself to stay with the Fallen Colonies.
The short-term goals will include the search and aid of survivors, as well as mounting an increasingly organized resistance against the Cylon occupation force. Adventures will take place on and around the Twelve Colonies, as well as some neighboring systems and Cylon territories.
The long-term goal of the Theomachy will be the eventual defeat of the Cylons and the liberation of the Twelve Colonies.

By choosing the path DIASPORA, the Raven will abandon the Fallen Colonies in favor of searching for a new home.
The short-term goals will include the gathering of a large exodus fleet, shaking off the Cylons in pursuit and the search for a potential distant world to settle. Adventures will take place in uncharted territories.
The long-term goal of the DIASPORA will be the founding of a new 13th colony beyond the reach of the Cylon.

BOTH PATHS will include aspects of the other. We'll still have some Rag-Tag Fleet themed scenes and exploring distant systems when choosing to remain, and of course, there can be an attack on the Cylon territory on the Diaspora path. The Path will, however, set a focus on the long-term goals of these Adventures! Leaving the system might be the wiser choice,since the cylons turned the colonies into wastelands.

Permalink Reply by Alexander Falkberg on November 5, 2018 at 5:33pm

The Quorum has reached a decision.

At 26 votes for (and 13 votes against,) the choice has been made for the Raven Battle Group to remain close to the Cyrranus system and pursue an active war effort against the Cylon.

People of the Colonies – Children of the Twelve Tribes of Kobol,

great strife has befallen us.

In their attempt to vanquish humanity, the Cylon have destroyed our fleets. They have burnt our cities, defiled our temples and murdered our fellow souls. But they have not broken our resistance. Know that in this, our darkest hour, we are not going to flee into darkness. Neither on this day nor on the next, will humanity come to an end.

We do not know how many of you are out there. Whether in shelters or in the wilderness, in the ruins of our cities, scattered in between our planets, on wreckage and within last bastions of armed resistance. But before we have not found every last soul left of our kind, we will not yield.

For this, we fought on the plains of Aerilon and for this, we shall continue to fight. We shall go on to the end, we shall fight on the white world of Aquaria, on the eleven seas of Picon, in the grand cities of Canceron and in the jungles of Scorpia. We shall overcome all hardships and the Cylon threat and we shall bring the fight to them, whatever the cost, to banish them from this universe, once and for all.

Know that this is not the end of days.

This is the Colonial Fleet, and we will be coming for you. 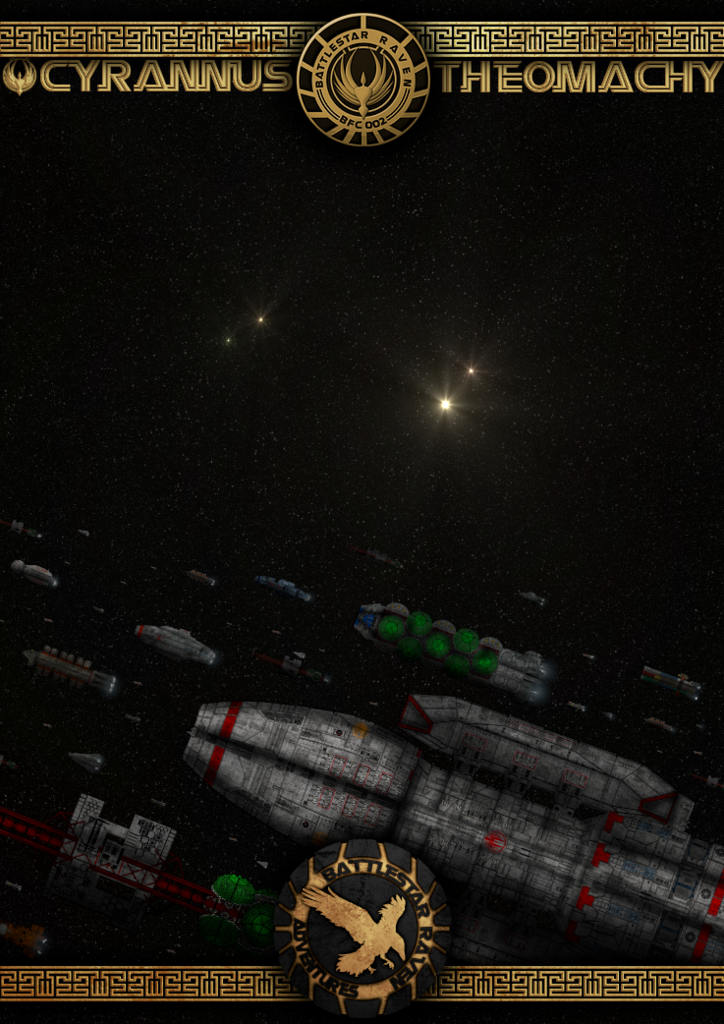 A note to all who voted to leave the Cyrannus System:

Rest assured that your voice has been heard as well. The continuing adventures of Battlestar Raven will feature a rag-tag fleet and scenarios far from our homeworlds. The Raven is not about to engage in a blind guerilla war against the Cylon in order to capture radioactive wastelands and, of course, the safety of our civilian fleet and the continued existence of the human race will have the highest priority.