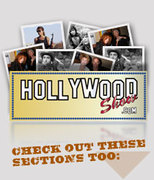 Export to Outlook or iCal (.ics)

ABOUT THE HOLLYWOOD SHOW

Started in 1979, The Hollywood Show is perhaps the best known autograph show in the Hollywood area. It is legendary among autograph shows, not only for the celebrities who appear, but the crowds each event brings.  It's the only celebrity autograph convention held four times per year.  Currently taking place in Burbank, California, The Hollywood Show has earned the reputation of being "THE PLACE" for celebrities to appear, and known worldwide as the perfect place for fans to get "up close and personal" with their favorite stars!

In addition to the fabulous line-up of celebrities offered at each event, The Hollywood Show has teamed up with hundreds of vendors to offer fans the ultimate selection in show related memorabilia and much, much more.

The staff of The Hollywood Show works around the clock to bring entertainers and fans together for each of our events.  We have a large network of contacts and celebrity relationships that always prove helpful when inviting guests to appear.